And another summer comes slowly to an end…

We’ve enjoyed a week here at the beach and thankfully no one picked up strep or an ear infection or a stomach virus (a first for us, I think).  Poor Jackers did have a tangle with a jellyfish; jellyfish: 1, Jack: 0.  I cannot remember Jack howling like he did when he was stung.  He came flying out of the water and was nearly hyperventilating (though we do recognize our J is a bit of a drama-king, even this was a bit over the top for him).  A lifeguard came running down and immediately took Jack up to the recreation hut where he was promptly given a sno-cone (cherry flavored; a sure cure-all) while they rubbed a vinegar and ammonia combination on his legs.  Seems that jellyfish did put a hurting on our firstborn:  Jack had streaks around both knees, running down one leg and wrapped around one ankle.  No amount of coercion could get him back in the water yesterday, so we headed in after a brief post-sting visit to the pool.

We’re happy to note that he seems to be on the mend today and other than wondering what happened to the jellyfish who is now missing several of its tentacles, he has not mentioned his ordeal at all.

The reality that he is starting first grade in 5 days is starting to set in.  One of the many beauties of the Montessori school is that there are mixed age classes, so one’s offspring doesn’t head off to kindergarten, but instead is termed a 4th year primary student.  My blase’ attitude I had last year about such milestones has come back to haunt me.  “Oh, no worries!  Kindergarten’s nothing!” I told my friends who were sniffling and teary-eyed after watching their child truck down a hallway into his first “real classroom.”  Now I face that same long hallway in a few days.  It’s certainly bittersweet.  He is ready, though…ready and incredibly excited for this new chapter in his life.

This other child, however, is not so ready to attend school without his big brother.  Although he’s only 4 & 1/2, Tuck is old enough to worry about being separated from Jack.  I never dreamt I’d have two sons who are so attached.  They crack us up.  They sneak through their jack-n-jill bathroom at home (worst architectural invention ever, by the way) to crawl in bed with each other in the mornings.  They sit nearly on top of each other on the couch.  In short, they are best pals.  It must be marvelous.

Tucker isn’t going to be completely alone at First Montessori this year, though; Theo will be joining the toddler class–which conveniently has a window looking into Tucker’s classroom.  Tuck has already announced that he’ll be peeking in on “Baby Theo” to make sure he’s doing ok.  I’m the one who’s worried.  I have started second-guessing my decision to put him in for 5-days.  What?!?  How is this, you say?  I’ve long said that potty-training a child ranks up there next to passing the bar exam on my list of life’s accomplishments.  I’ve had 2 successful trips down that long, unfortunate road and feel confident that Theo will be just as quick to catch on–at 27 months…which will be October 30th.  His new class will find him wearing big boy underpants from the get-go.  Ugh.  I’m not concerned by the infinite loads of laundry I’ll be facing (laundry is already a Sisyphean task at our home); I’m more worried about sweet little hot-tempered Theodorable who is likely to flip out and become defiant (possibly throwing things, as is his anger-management reaction of late) when faced with trying to master a bodily function for which he’s not physically mature enough to grasp just yet.  I mean just look at this little guy:

Behind those big blue eyes and huge smile is one determined little fellow.  As much as I talk big game about having time to myself, I know this one is my last ride through the wonders of toddler-dom and, when the rubber hits the road, I’m not quite ready to close this chapter.  Three boys will wear a mom out, and when I’m lying in bed at night, trying to click off all the umpteen worries I have, one big one stands out and will not click off:  that this sweet little fellow who melts everyones’ hearts has gotten the short shrift.  It’s quintessential Mom-Guilt at its peak.

Jack adored The Music Class and took nearly 3 years worth of classes.  Same for Tucker.

Theo had one session.

Tucker bounced out his energy in numerous gym classes.  Again, Theo’s gone wild during one.

By age 2, Jack and Tucker had many friends of their own, were invited to birthday parties and even hosted ones of their own.  Theo’s friends are the coddling, older female siblings of his big brothers’ best pals.  Ok, that one might not be so bad… 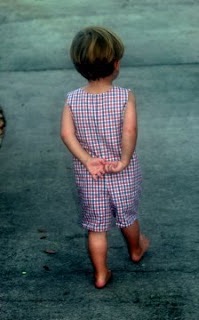 Theo’s babyhood is walking away from me.  He’s turning into a little boy–his own little person with his own spicy little personality.  And all of this means that I, too, am growing older, which rattles those melancholic and nostalgic chains deep inside me.

Our sweet Theo B. turned 2 this past Friday.  Two?  Already?  You’ve probably all heard the adage that the days go by so slowly, yet the years fly right on by.  Completely true here, I say.  Our days are filled with damage-control (or so says my husband).  These three little men are creative beyond words (at least that’s what I call it; technically, I suppose they are a few steps beyond mischievous).  They keep me hopping.

But back to our freshly minted 2-year old. 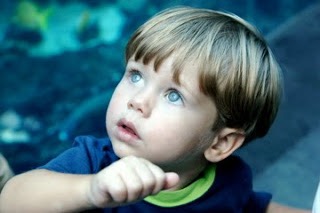 Theo has blossomed into his own little person.  He loves monkeys and golf carts and waffles and bubbles and buses.  He hauls around a stack of old swaddling blankets that he originally called “dot-dots” but which have since morphed into “purples,” an homage to his big brother Tucker (who still hauls around his own blanket named, of course, Purple).  Theo starts school in a mere 24 days. 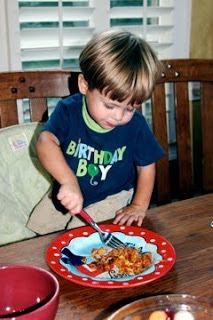 There are days with Theo when I wonder what else is left for him to investigate (read: destroy).  Obviously, he adores Tucker and has already set his goals to include emulating everything our original daredevil does.  Theo is a climber.  Theo has no fear of speed or hills–flying down a hill on wheels is the cat’s meow to him.  Theo has a temper.  If provoked, he’ll clinch his fists up into little balls and screech in varying pitches.  Despite all this colorfulness, Theo truly does live up to his nickname, Theodorable.  He’s such a joy.

Tucker has had an adventurous summer, also.  We’ve visited an ER and also had a front tooth “repositioned,” which is dental-speak for jamming an almost-knocked-out front tooth back into place.  He can dive off the diving board now and is only about an inch shorter than Jack.  His stuffed bunny collection has reached maximum capacity, and he still appreciates the fashion statement made by the wearing of a good cape.  He adores the beach and holds his own in the waves.  T tried his hand at rock-climbing during a birthday party and managed to scale a wall all the way to the ceiling (some 30 feet or so in the air) on his very first try.  He is active, athletic and a complete cuddlebug to boot.  Our Tuck keeps us on our toes.

Our J has grown up so much this summer.  He loves doing math and science projects (so unlike his mother…), playing on the computer, and swimming.  Despite being the pickiest eater on the planet, he has expressed an affinity for cooking.  His imagination is delightful; he and Tucker have turned their outdoor fort into a pirate ship, a clubhouse, a get-away-mobile for SuperDog and a rabbit trapper (sadly, that one didn’t work so well…).  Baseball is his sport of choice; if that doesn’t pan out for him, then he says he’ll be a veterinarian.  Our firstborn amazes us daily.

Actually, all three of our boys amaze us daily.  As a neighbor once told me, we are certainly “in the weeds” right now, but that’s just fine by us.  (Clearly, we have no choice in the matter, so best to embrace it and gather up all these stories of the boys’ wild and woolly adventures and run with it, right?)  Some days, the weeds seem shorter and less unruly than others, and it’s these little (often infrequent) days that re-energize us and keep us going at it with a smile. 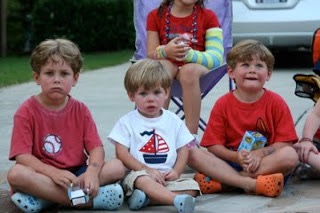