Most everyone knows what an epiphany is; we’ve come to use the term colloquially to mean a great realization…it’s that wonderful light bulb moment in which the fog dissipates and things become pristinely clear and sensical.  In the Christian faith, Epiphany is a Feast Day occurring on January 6, exactly 12 days after Christmas.  I’m borrowing from a timely email I received from our priest today, but in addition to being commemorative of the arrival of the 3 Magi who brought their gifts of gold, frankincense and myrrh to the newborn Baby Jesus, Epiphany is also associated with the Lord’s baptism in the River Jordan and Christ’s first miracle, which was the changing of water into wine at a wedding in Cana of Galilee.  Epiphany is the beginning of the great celebration of Christ’s life, a festival of joy which comes abruptly to a close on Ash Wednesday when Christians enter into the somber, reflective period of Lent.

Epiphany is an awesome event; it is a glorious, holy Feast Day, followed by several weeks of brightness, hope, light-heartedness and good times.  It is a period full of happiness, celebration, joy and thankfulness.  And it is especially meaningful to me.
Five years ago tonight, I fully grasped a sense of my own mortality.  No longer did I view myself as an indestructible fireball of energy who could do anything and bounce right back after shaking the dirt off.  Never again will I go at life bolstered by that immature mantra chanted by the young that wounds heal (or that scars are cool).  At no other point in my life have I felt so helpless, so at the mercy of others and of my failing body.  Five years ago tonight, I nearly died.

Five years ago tonight, our Tucker arrived, four weeks early, in a most spectacularly scary way.  I felt a strong contraction, an internal “pop”, and then there was a steady stream of blood…more blood than one could fathom, even in our society tempered to gore by sensationalized tv.  Our 19 month old was in the backseat yelling “Go, Daddy, go!” as we ran red lights and sped down Georgia 400 to Piedmont Hospital at speeds over 100 mph.  I literally could not think; thinking (or talking) made the blood flow faster.  The OB on call asked where we were and then told Russ to “put the pedal to the metal.”

By the time we arrived at Piedmont–a mere 15 minutes or so after this ordeal began–I could not walk.  Because God does have a sense of humor, January 4, 2006 was an Indian summer type of day and I’d taken Jack for a walk earlier that day while wearing gym shorts–light gray gym shorts.  And now I was hemmorhaging profusely.  That will get you some great looks as you’re wheeled briskly through an ER, let me assure you.
I was wheeled into Labor and Delivery Room 10, which was the exact same room where Jack was born.  The room was chock full of people–nurses, doctors, an anesthesiologist, a NICU team.  You know it’s not a good scenario when the doctors are saying there’s a lot of blood.  You also know it’s not a good scenario when the nurses ask if you are wedded to these clothes because they are just going to dispose of them.

I’m taken to an operating room.  The nurses are adamant about me not turning around.  Later I will find out that this is because the neonatal crash unit is there waiting in anticipation of a bad, bad outcome.  The anesthesiologist tells me there’s no time for Novacaine prior to the insertion of the epidural so I need to “hold tight and take a deep breath.”  Russ is still not allowed in the operating room.  I’m there all alone but with a roomful of masked, sterile individuals.  I had never been more scared in my life…

…until about 3 minutes later when they began the surgery.  Russ says I said “I’m dying; I’m dying.”  I do remember saying that and truly, fully believing it.  There was an elevator.  It was black everywhere else except inside the elevator, so I stepped in.  I heard Papa B’s voice, clearly, distinctly.  He helped calm me down.

I wound up having to be fully knocked out after the epidural’s effectiveness wasn’t happening quickly enough.  Tucker arrived at 8:51pm, exactly 1 hour and 19 minutes after I set foot inside the doors of the hospital. 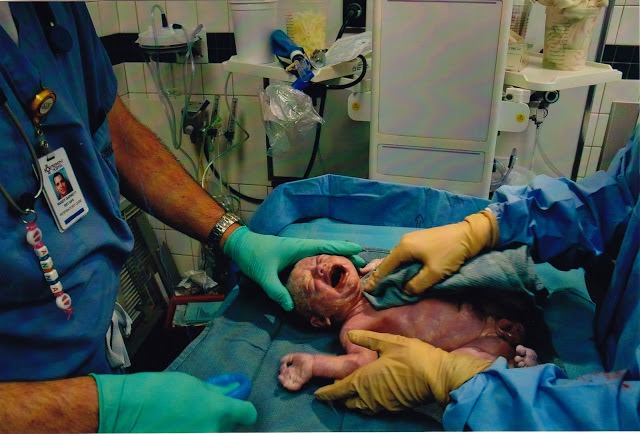 Here Russ holds Tucker for the very first time; I love how you can see his watch, which says it’s a little after 9pm.

This is me seeing Tucker for the first time.  I have absolutely no recollection of this whatsoever. 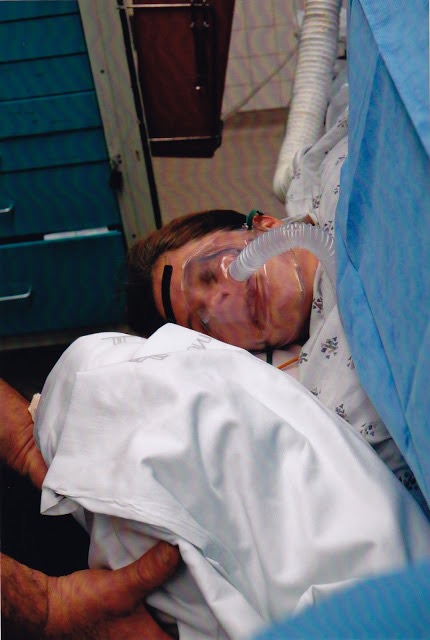 After 45 minutes more of work to stop the bleeding, I am finally in the recovery room and looking like I’ve been through the ringer.  The doctor is talking to me right now (about an hour and a half post-surgery) saying I’d had a 10-15% placental abruption and ten years ago, we’d have lost the baby.  Fifty years ago, we’d have lost both of us.  Abruptions of 20% or more result in varying degrees of organ and brain damage to the infant    Heavy news…to say the least. 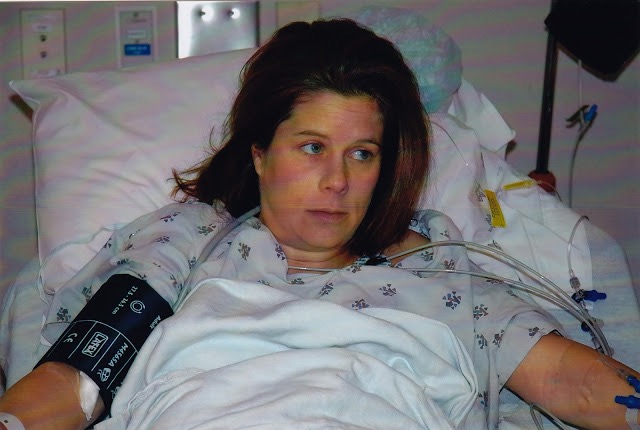 Finally, after a few failed blood draws, several other tests and a bag of fluid, they bring my new son in.
This is the first time I saw him (that I remember).  Tucker is about 2 hours old.

My sweet parents made the trip from Vidalia to Atlanta–normally a journey that takes close to 3 hours–in just under 2 hours.

Here my dad holds Tucker for the first time and learns Tuck’s full name:  Tucker Hilbert.  Hilbert is my father’s and his father’s name.  It was the most moved I’ve seen my dad in years.

The next morning, big brother Jack comes by to meet Tucker.
At first he was not impressed…

Though very large for his gestational age, this photo of Russ holding Tucker shows just how tiny he was.

At nearly a month old, Tucker still had bruises under his eyes from where he was so quickly pulled out.

The doctors also dislocated one of my ribs in the process.

But our Tucker rebounded quickly–a trait we’ve come to adore.

Here he is at 3 months old showing off his precious dimple.

So tonight, five years to the day since Tucker made his vibrant entrance to this world, I’m reminded of the uncontrollable fleetingness of everything.  I’d like to think that I’ve grown as much as Tucker has in these past five years.  He is one remarkable little boy.  His Godfather happened to be in Israel during Tuck’s birth and said a prayer of blessing and thanksgiving for him as he walked along the banks of the River Jordan just a few hours after Tucker’s arrival.  He also brought home water from the River with which Tucker was baptized.  Tucker is our most spiritual child; he has told us on numerous occasions that angels talk to him.  He is different; he knows it and so do we.  And so this year, like each year since 2006, I choose to begin my Epiphany, my celebration of life and hope and extreme gratitude, just a few days early.  May you all sense the spark of life, realize it, acknowledge its tenuousness, and be grateful for it in the coming weeks.