What?  What’s that you say?  This summertime curmudgeon might be switching camps?  Say it isn’t so… 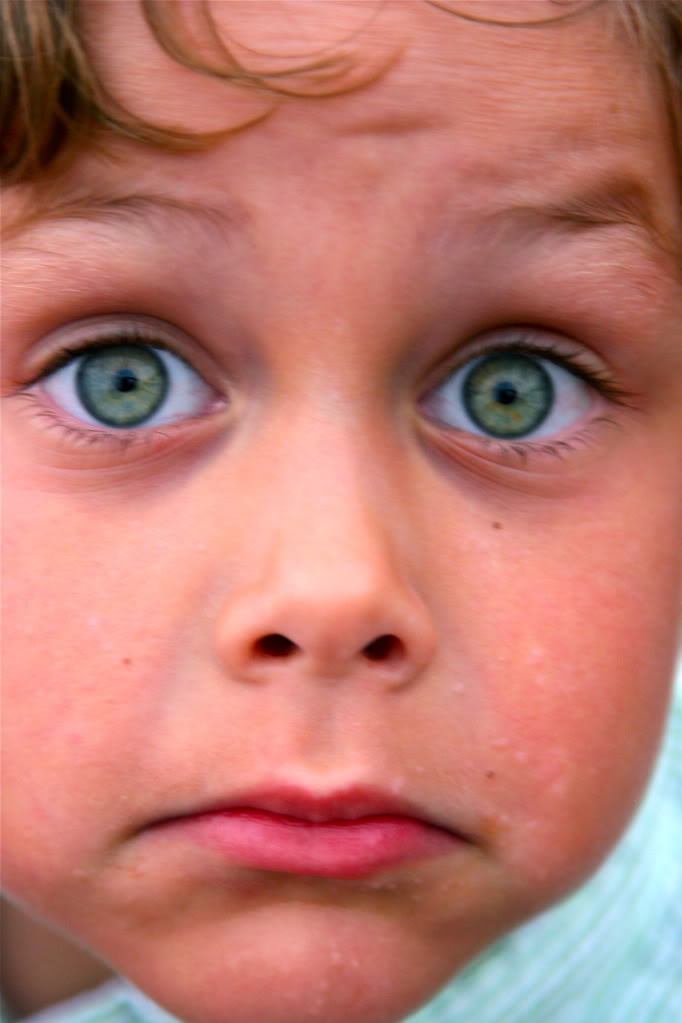 Other than poor Russ having to be on umpteen conference calls, we’ve had a most lovely time here at Amelia Island this past week.

The one downer?  Those new floors we were having done?  Seems every single board in every single box was defective.  Ugh.  Lucky for us, our trusty friend and decorator has been all on it and once the manufacturer in California realized they were about to fork out some serious cash to house a family of five (and board two dogs), they decided a working weekend wasn’t so bad after all.  We’ll hopefully be back in our home on July 3; all fingers and toes are crossed.

Today we were able to go on runs and not suffocate through smoke inhalation.  Thank goodness for a heavy downpour the night before!  Our beach outing featured a sand castle contest run by the great AIP youth crew–complete with snow cones for the victors. 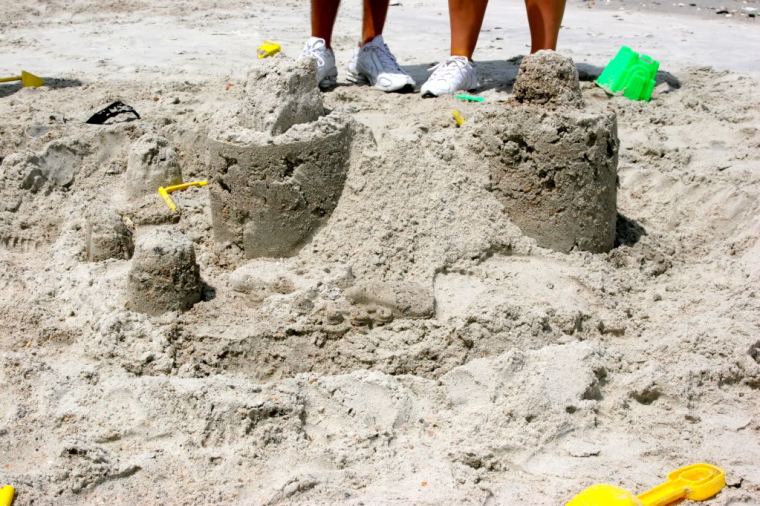 You could seriously offer a rock for a prize and that’s all it would take to stoke Tucker’s competitive fire (wonder where he got that?).  Boys vs. girls–what the boys’ castle (?) lacked in decor, it made up for in height.  Winner winner, chicken dinner.  All three boys were thrilled to get a free snowcone.  And it really is all about the prize, isn’t it? 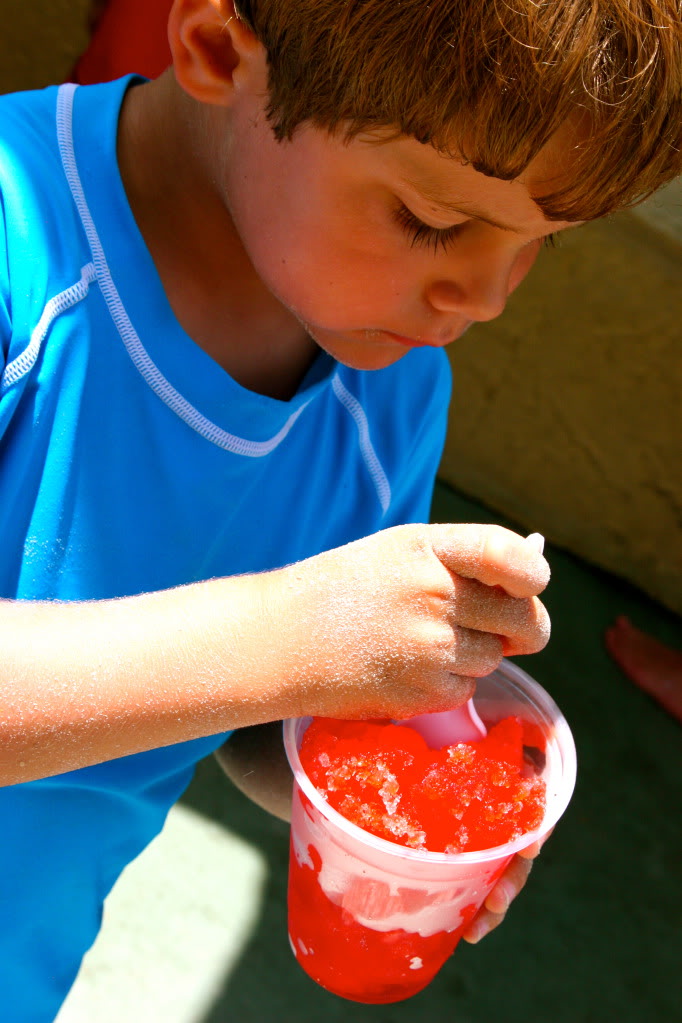 While the boys were digging their way to China, Russ and I were swooning over the best summertime adult beverage ever:  Caldwell Syrah Rose’.  This ain’t your screw-cap, uber-sweet pink and fruity junk you swilled back in high school, let me tell you.  Russ and I tasted this with the winery’s owner in Napa back in January and it is spectacular.  It’s a syrah that wasn’t left fermenting in its own grape skins long enough to give the wine its usual dark red color so it comes out a very clear light red (which I guess is another way of admitting that, yes, it is pink) but without all the cloying sweetness of other typical “light red” wines.  Served very cold while watching the tide come in…oh, good stuff, indeed.

“What?  We’re going to taste PINK wine at 9 in the morning?” (For the record, that made it noon on the East Coast so we do have a modicum of pride left…).

With John Caldwell, one of our vintner heroes.
Caldwell Winery

We left the beach to retrieve the boys’ snow cone prizes and to take a dip in the pool.  Having scratchy grains of sand clinging to me makes me squirm, but to the boys, it’s the more the merrier.  They adore having giant patches of it plastered to their legs, arms, faces and bathing suits–like the battlescars of a good day on the beach… 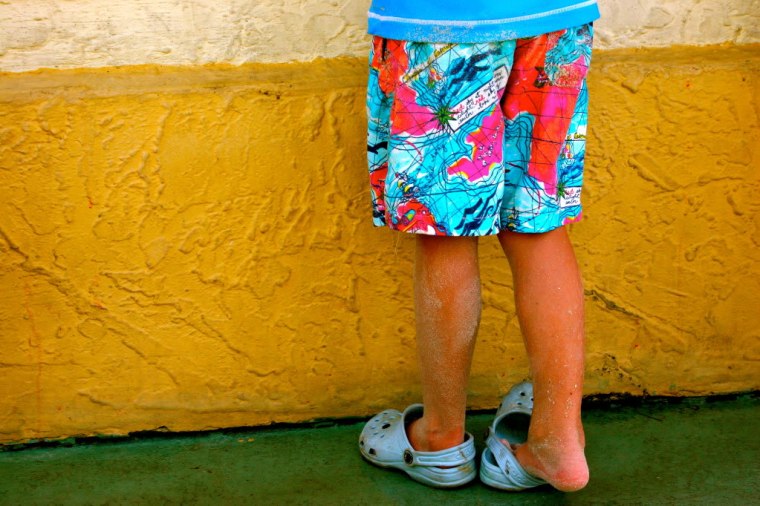 From there we did some jumping, some splashing, some dancing, some eating and a whole lot of laughing.

Is it just me or is The Temptations’ song “Just My Imagination” one of the best beach songs ever?  Here, Theo and I break it down.

After a quick jaunt up to the Marche for ice cream, we crashed a wedding.  (Bet you didn’t see that one coming, did you?)  Signs all over the Plantation pointed towards the wedding, so Russ decided we should check it out; the boys were intrigued by the bride and groom and her bright purple clad wedding party mingling near the water.  Since we weren’t invited and because the boys were loudly asking questions about the purpleness of everything (and, most importantly, since wedding crashing is not a skill we want our sons to learn at such a young age), we turned around out of Walker’s Landing and cruised on down to Drummond Point, our single-most favorite place here.

I could take photos here all day long.  It has the best tree fort in the history of tree forts:

It has one fantastic playground, with monkey bars that are perfect for dangerously hanging upside down by one’s knees:

It has the best boardwalks in the history of boardwalks (at least through marshlands): 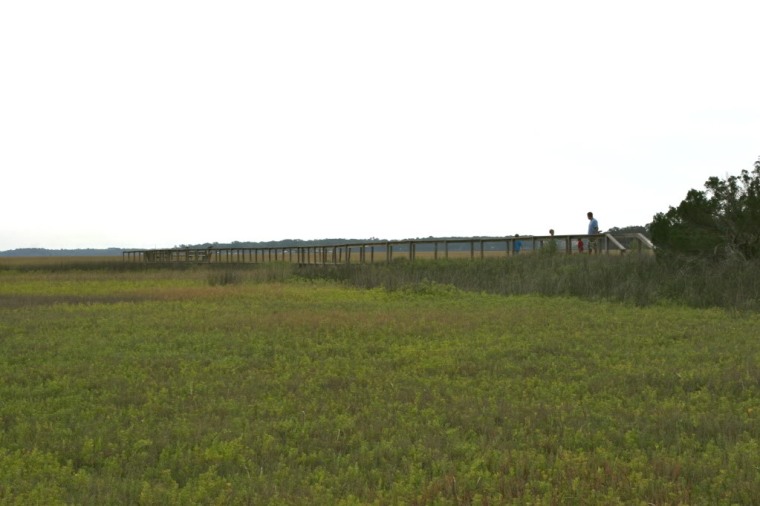 There are hermit crabs, giant birds, croaking toads, scuttling wildlife, winding trails and the best sunset view on the island.  When the tide turns, you can also find yourself racing down the long boardwalk from the pier to the mainland, trying to beat the tide (we’ve gotten wet before when we waited too long).  Drummond Point is a hidden gem here and we love it.  Taking a mini-adventure out here late in the afternoon caps off the perfect day.

Here’s to island living (for another week, at least).
Here’s to tired and very happy little boys.
Here’s to summertime.