Forgive me if this reads like a funky discourse on modern/Imagist poetry (though obviously “economy of language” has never been my strong suit).  Sometimes things just come together in eerie ways for me–ways that are not forced or conjured, but hail from tidbits and nuggets and ideas that spring into my head throughout the day and then swirl around in there until, I guess like some sort of slow-churned homemade ice cream, they freeze together into something one must share.  This could be one of those times.

Oh, William Carlos Williams, I finally get you.  I got you, of course, a while ago, but now, my man, I really, really get you.

It’s been a week of wildness.  I took a much needed, yet seriously spontaneous, road trip with a dear friend of 34+ years to Charleston, South Carolina to surprise my oldest friend, Allison, on the occasion of her 40th birthday.  My traveling companion, Lari, just barely loses the “Longest Time of Being Friends Award” by a few short weeks, solely because Allison’s grandmother and my Mama B. insisted we meet prior to the start of first grade; if you’d known these two women, you would fully understand.

Lari and I drove 5 hours plus serious change, only to show up on Allison’s doorstep at 10 p.m. with one of us [ahem] sporting a full-body chicken costume whilst the other hid in the bushes to document the moment.

Allison had no idea we were coming. 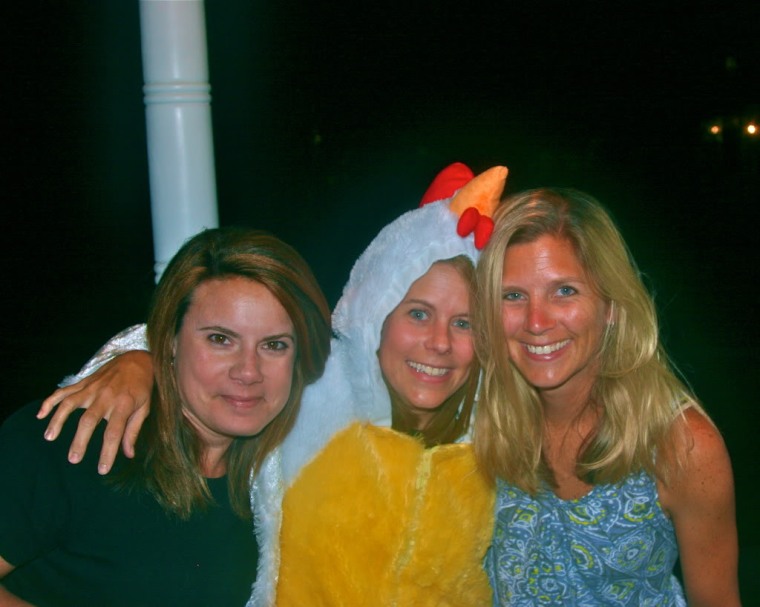 The story of the chicken suit goes way, way, way back and is wickedly funny.  Perhaps a future post will feature The Chicken Lovers of America Handbook (featuring illustrations and a Preface by John C. Collins), copyright 1982, in its entirety.  It just depends.  Good things come to those who wait.

We laughed, some of us slept (ahhh, glorious pitch-dark, 65 degree hotel room sleep!), we ate, we drank amazing wine and we celebrated 40 years of life, together.

The coincidences leading us down the path to a 35-year long friendship are nothing short of miraculous.  The fact that my Mama B. and Allison’s Grandmother were in the same bridge club and, way back in 1976, both had tiny granddaughters moving from Atlanta to little old Vidalia just set things into motion.  Lari, Allison and I were all plunked in Mrs. Jordan’s first grade class together at J.D. Dickerson Elementary and somehow our little triumvirate was never separated as we forged our way through twelve grades.  We’ve all made a devoted, highly conscientious effort to stay in each other’s lives, through the bumpy and the smooth, the simple and the complicated, the near and the far, the easy and the difficult.  The pinpoint accuracy of our good fortune amazes me.  So much happiness depends upon each little element.

I rode that wave of happiness–which this time hailed from a weekend of laughing so hard you end up hoarse-voiced from crying–all through this week, despite the curve balls we were thrown.

You must, along with us, ask why on earth this sweet, dimpled thing would ever cause any trouble?

Our little Reverend had a most electric week.  His frog, Swimmer, passed on to that great Lillipad in the Sky while I was in Charleston.  I noticed early on Friday that Swimmer had a foot in the grave and another on a banana peel, so Tucker and I tried to get his affairs in order. Despite the small, coffin-shaped, frog-sized box and serving spoon sitting right next to his habitat, Tucker was not able to give Swimmer the funeral he so desired (the “he” here being Tucker, not Swimmer…I wager that Swimmer was possibly quite relieved to exit his 4″ by 4″ home on Tuck’s desk; the earthquakes produced by Theo’s visits had to be dropsy inducing, at the least).  Instead, the ever-efficient Russ gave Swimmer a hygienic burial at sea which I learned about in a pitiful little voice mail from Tucker on Saturday night bewailing the fact that he didn’t get to “bury Swimmer or even say a prayer for him!”

Clearly, Tuck holds a vengeance.  He takes that “eye for an eye” thing to heart, though his five-and-a-half year old self wasn’t exactly sure where his fury should take aim.

That puppy’s gone like the wind after Tucker’s ill-fated scuba-diving re-surfacing attempt in the big bathtub; Tuck dove under the bubbles, held his breath as long as possible and then popped up, in true, dramatic Tucker-form, right smack into Jack’s chin, knocking out Jack’s (slightly loose already) top tooth.  Seriously.  Ladies and Gentlemen, I present to you:  Story Number 1 to be told around our Thanksgiving dinner table in 20 years.

After being reassured that a new tooth would indeed grow back even though we couldn’t see any sight of it just yet, Jack was back to full form within a few hours.

But back to that poetry allusion… 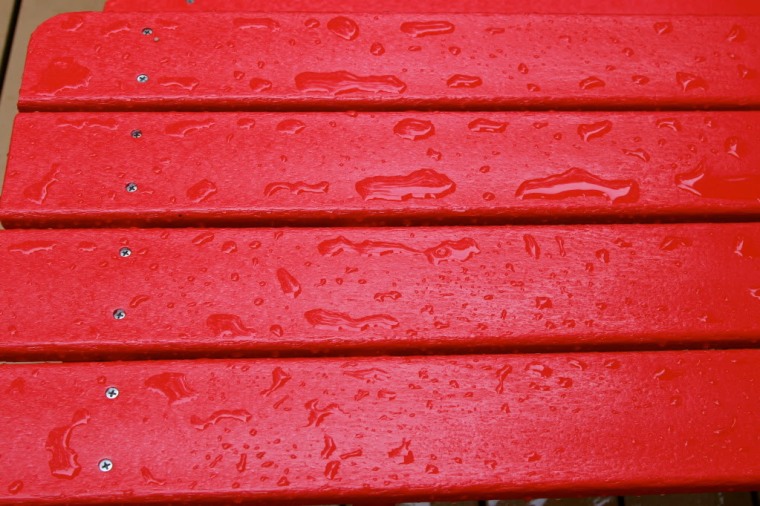 Last night’s Unexpected was a Firefly Catching Extravaganza (yes, ’round here we call them fireflies, not lightnin’ bugs).  With pj’s on and Mason jars in hand, we tiptoed out to the fort at dusk last night. 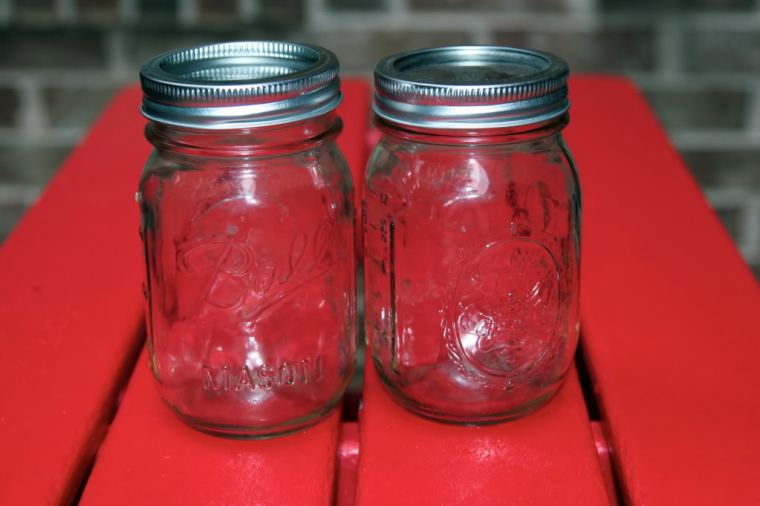 Does this scream summer or what?

It took awhile for the fireflies to be brave (or stupid) enough to venture through the fence to our neck of the woods…but we found ways to kill the time and to perfect our attack plan.

Pensive Jack plots how he will catch the most… 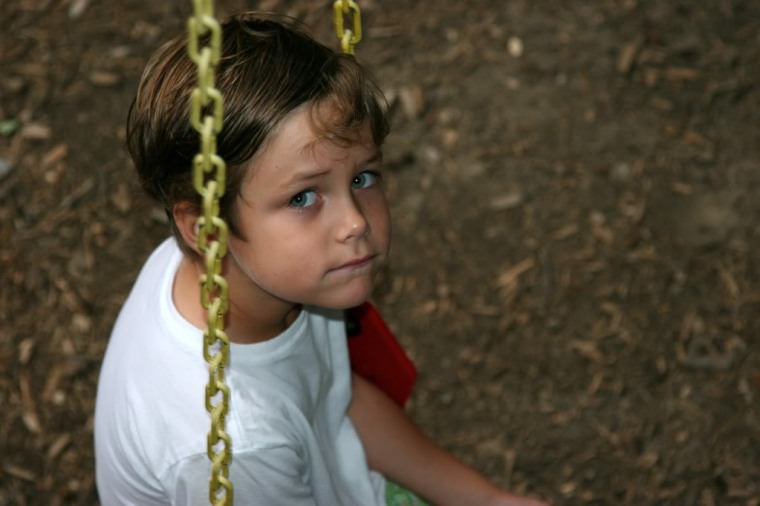 …while Tucker the Brave swings upside down, glass jar in hand.  (This sort of dangerousness doesn’t even register on the radar at this point in our lives…).

Once they came out, however, it was magical.  The weather in Atlanta had given us an unheard of 70 degree night and the fireflies were loving it as much as we were.  I think in the end we had a jar of around 20 of them–Tucker, of course, had let some out in his attempts to hold them after they were caught.  We let them go, but only after taking them into the one windowless bathroom in our house and letting them do their stuff.  A-mazing. 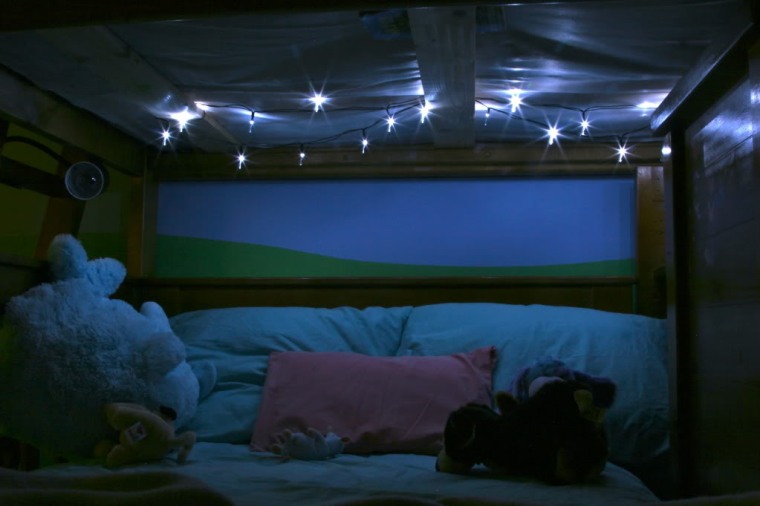 But release them we did, after all our gentle and dedicated work to catch them. 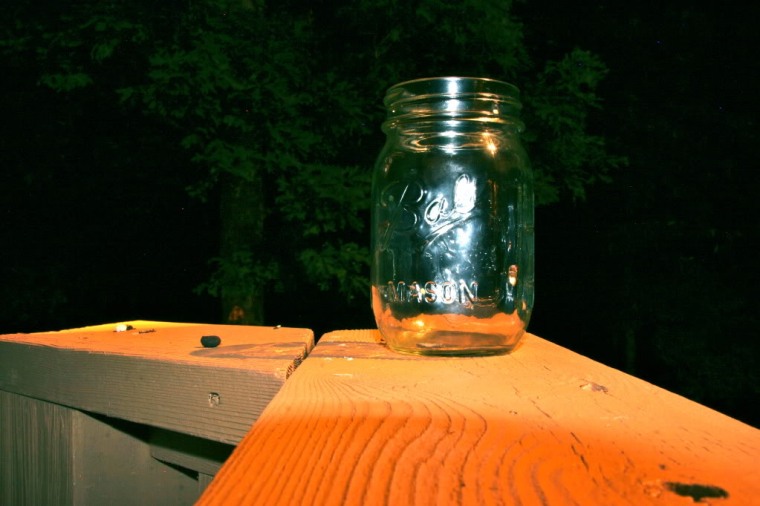 Here, I’ll make it easier for you by tilting the jar sideways.  I know your journey here was a tough one. 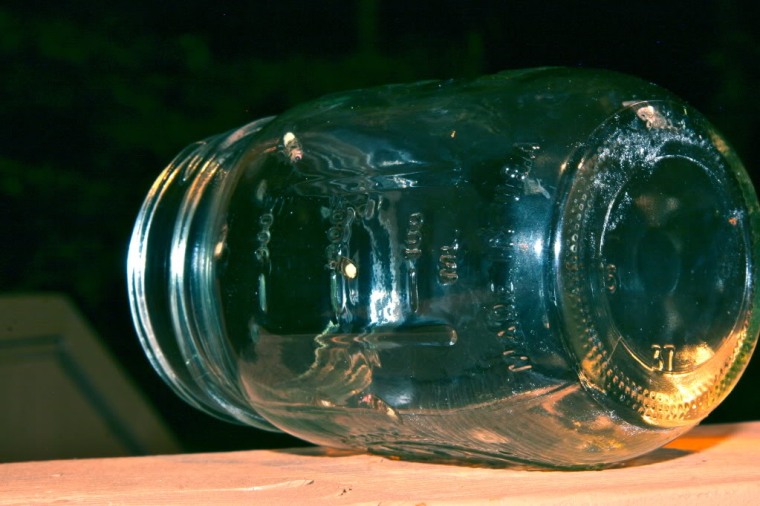 So while mentally composing this post, I was bombarded by metaphors of jars and children and catching fireflies only to let them go after they’ve knocked your socks off with their sporadic yet impressive sparkling.  I had oodles of things to say about friendships that have basically run the length of one’s lifespan.  I had stuff to say about a son knocking out another son’s tooth, then stealing from the Tooth Fairy and then lying about it but following up this atrocious behavior, maybe 1700 breaths later, by snuggling up next to me and falling asleep with his hand on my face.  I had frustrations to release about being a single parent for four days while Russ was out of town for work.  I had a gripe about our new red picnic table with a funky screw sticking out of the top.

Then it rained–a long, windy, late night, thundery type of rain–and Russ returned and the boys took it down a notch and Mother Nature gave us a gift of autumnal weather in mid-July and, well, everything that depended on everything else just made sense.

So cheers to at least 40 more years. 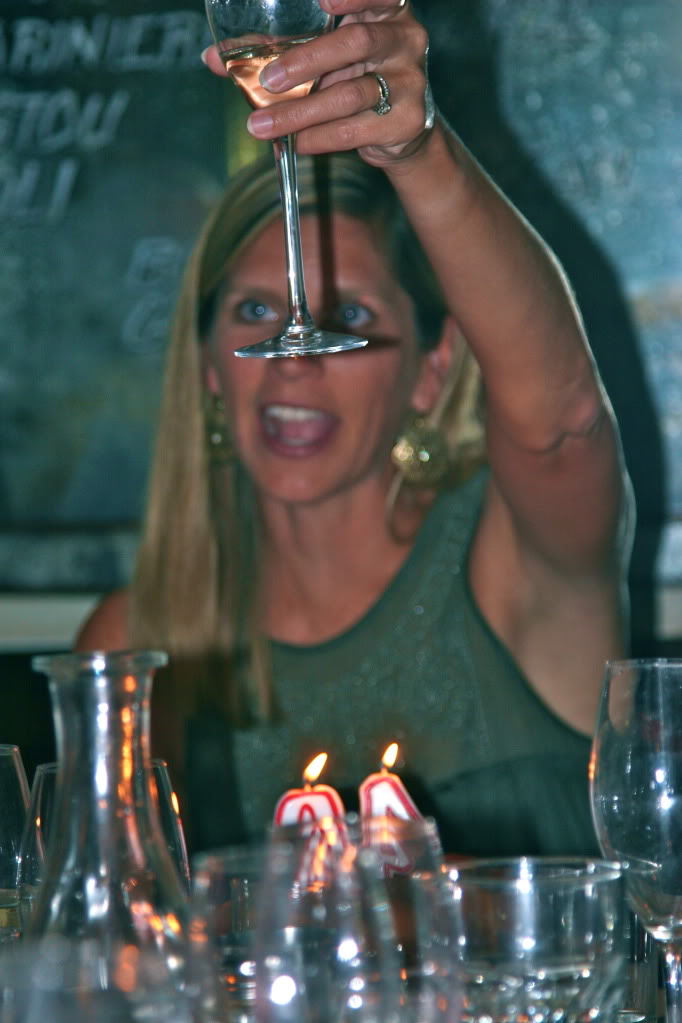 Shout it from the rooftops. 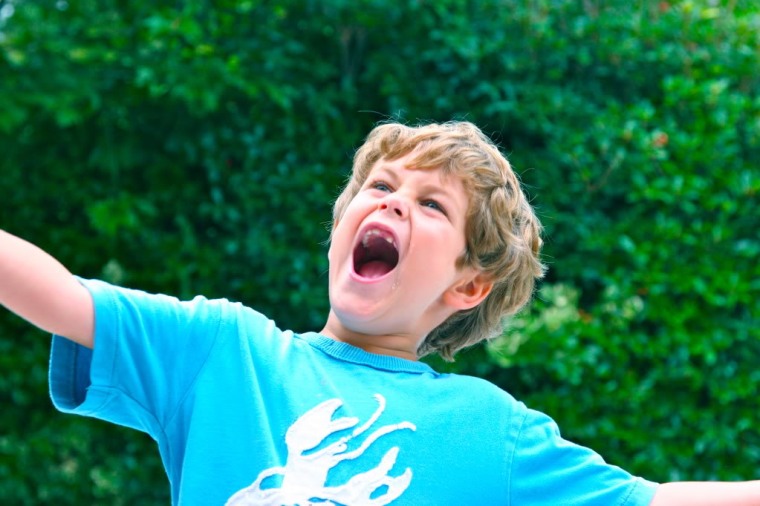 William Carlos Williams is a genius.

And this is just to say that.

so much depends
upon

beside the white
chickens.