We’ve been playing a lot of chess around here lately…a lot.  And Jackers is pretty good.  It’s rather humbling to get whipped by your 7 year old, I can assure you.  He is taking a chess class at his school one afternoon a week, and he rushes in the door ready to show off the new moves he’s mastered or discovered from other, more capable players.  Today was a first, though.  Today, I won.  Oh, yes, I celebrated my victory in a very sportsmanlike way, whooping and hollering and dancing a jig…until Jack told me that I’d set my king up on the wrong side of the board and thus had to forfeit.  Ah, well.

Thank goodness the weather has finally gotten cooler.  Lower temperatures put everyone here in a good mood, me especially.  Time outdoors isn’t spent mopping sweat off one’s brow; instead, we can actually enjoy shooting hoops or tossing a football or, if you’re Buckley Dog, going to town on a new chewy bone.

Cooler weather also means it’s time for us to break out the autumnal decorations which, to be brutally honest (with the exception of our one proper fall-like wreath), are basically just an assortment of completely random and incredibly funny Halloween items.  But this thing does makes me smile even if it’s a bit lopsided (I’m such a sucker for sunflowers)… 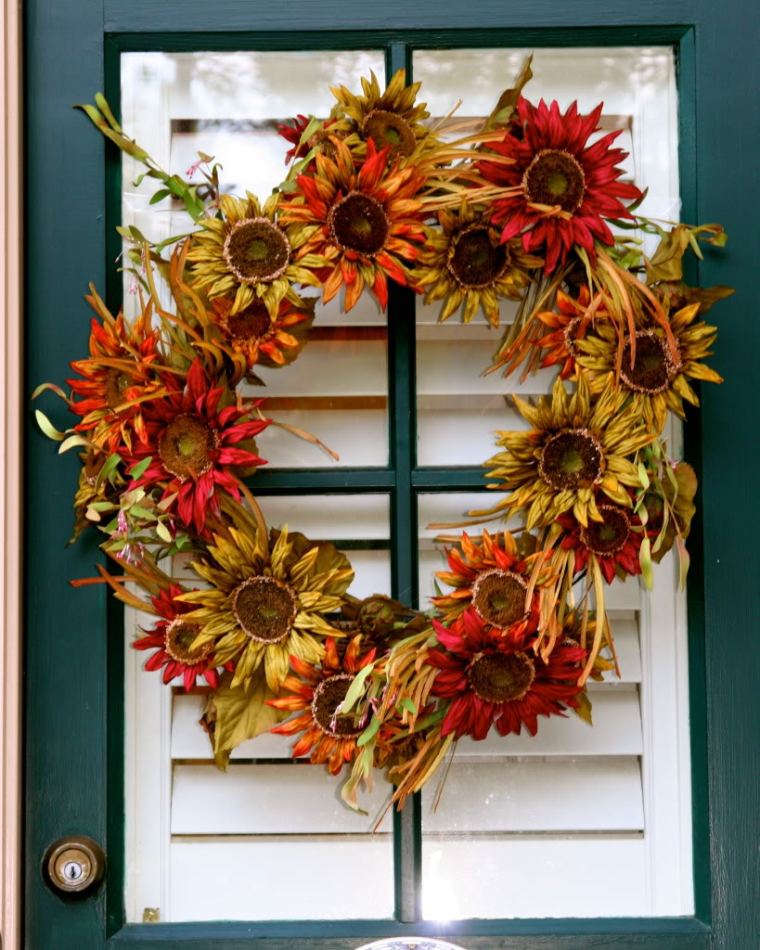 We’ve yet to bust out the fabulous neon-green inflatable skull; I’m figuring we need to hold off until at least October 1st for that one, lest our Homeowner’s Association freaks out and comes knocking on our door.  We do, however, have a skull on our mailbox, a fake vulture (which Theo says is a chicken) perched by a tree and several pumpkin themed doodads scattered about.  I have officially become “that mom” whose house (and yard) is filled with holiday items, but we do it mostly because it gives our kids such a kick, especially this guy, Halloween’s biggest fan. 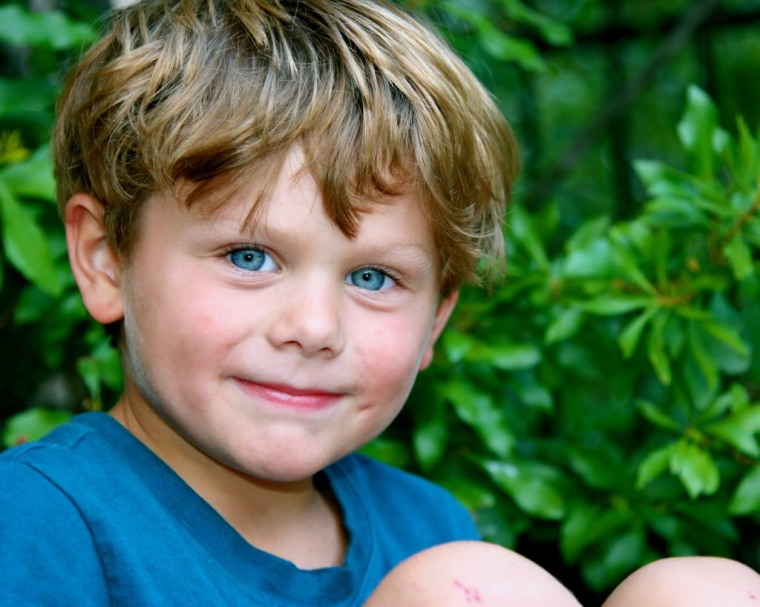 It’s so deceiving when Halloween catalogs begin clogging your mailbox in mid-August.  You think fall is just one cold snap–heck, one sub-90-degree day–away, but the wet blanket of summer just lingers on and on in Atlanta.  School starts back; football games begin; stores start trotting out cornucopias, but the sweltering misery of sticky, humid, long days has bitten down hard and refuses to let go.

Then, out of the blue, it happens.  Even though the temperature only drops a few degrees, it’s there:  that slight, tingly crunch of crisp air.  The day that treat arrives is the day I start itching to go bananas in the house.  I want to smell cinnamon and spice everywhere I walk and see splashy orange and yellow everywhere I look.  I want the windows open and the geese to start peppering the sky in their giant black V’s, heading south.  Slowly, all these things are drifting our way.  We are ready for them.

The birdbath decorated by Tucker’s class at First Montessori which the birds in our yard have decided is way too fancy for them to use; it has some nice lines to it, though, right?

A friend sent a recipe for pseudo-healthy oatmeal cookies (sans raisins–hooray!) that are chock full of Septembery spices like nutmeg and cinnamon.  We set out to make them this past Friday and while I thought the end result was delightful, the boys were quite disappointed that the cookies failed to include any type of chocolate.  Thus, my lovely little farmhouse bakery goodies were recommissioned as a charity project.

The same friend who had sent the cookie recipe had also sent–several months ago–a video discussing why it is so critical to teach the importance of charity to our children.  Russ and I have talked a big game since then, trying to figure out the best ways to go about teaching our boys this.  With our youngest being only 3, it’s not exactly feasible or safe to haul everyone down to work a shift at a food pantry or homeless shelter.  The best way we could illustrate charity to them needed to be something closer to home, something they have experienced themselves.

Since we’ve made a few visits to the ER at the Children’s Hospital here, they know that when you leave Children’s, you leave with a new friend–a stuffed animal or critter a volunteer or nurse has brought in to comfort you during your ordeal; this kind gesture was also seen at the hospital at Fernandina Beach.  Jack and Tucker both know exactly which animals in their collections came from the hospital.  Both have remarked time and again how sweet it was to have a stranger bring in a gift that goes far beyond the typical “treasure chest” type of generic, cheap knick-knack.

And thus, their charity project was born:  they are now saving money (and pooling it together) to purchase stuffed animals to donate to Children’s.  We couldn’t be prouder.

So I looked outside Friday afternoon to see our sons going door-to-door with Jack acting as salesman, Tucker pushing a toy shopping cart filled with bottles of water and a box-top full of homemade cookies, and Theo tagging along as their cuteness mascot (and quality control manager; I think he ate half the stock).  Our neighbors are so generous and patient and kind.  The boys banked close to $11 on their first attempt at fundraising.  They must have counted that money fifteen times Friday night. 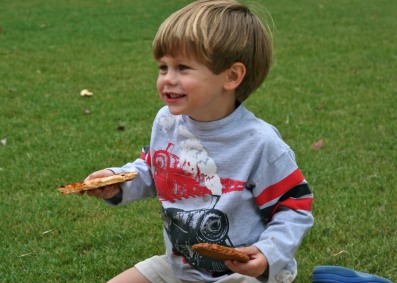 Such hard work deserved homemade pizza with black olives (since my other homemade food item of the day was less of a culinary success…).

Fall baseball has started back up, and Jack is now a mighty Grasshopper.  An orange Grasshopper. 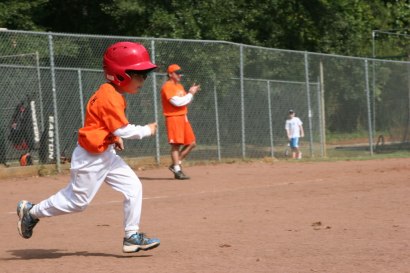 It is truly amazing to watch the progression of his (and his teammates’) skills through the seasons.  His league is still coach-pitch, but now the field is bigger, the ball is harder, and they only get 6 pitches and can’t use the tee.  (Clearly, having a coach who can pitch is crucial.)

Jack’s other love these days is running, and he’s actually quite good at it.  He has garnered compliments from all the P.E. coaches at his school which makes this old track coach beam, that’s for sure…He has his eyes set on running a 5K this fall; once we find one that doesn’t conflict with baseball, we’re all over it.

Though the leaves on our trees haven’t started to turn yet, we are so excited about the changes that come tagging along with the end bits of September. 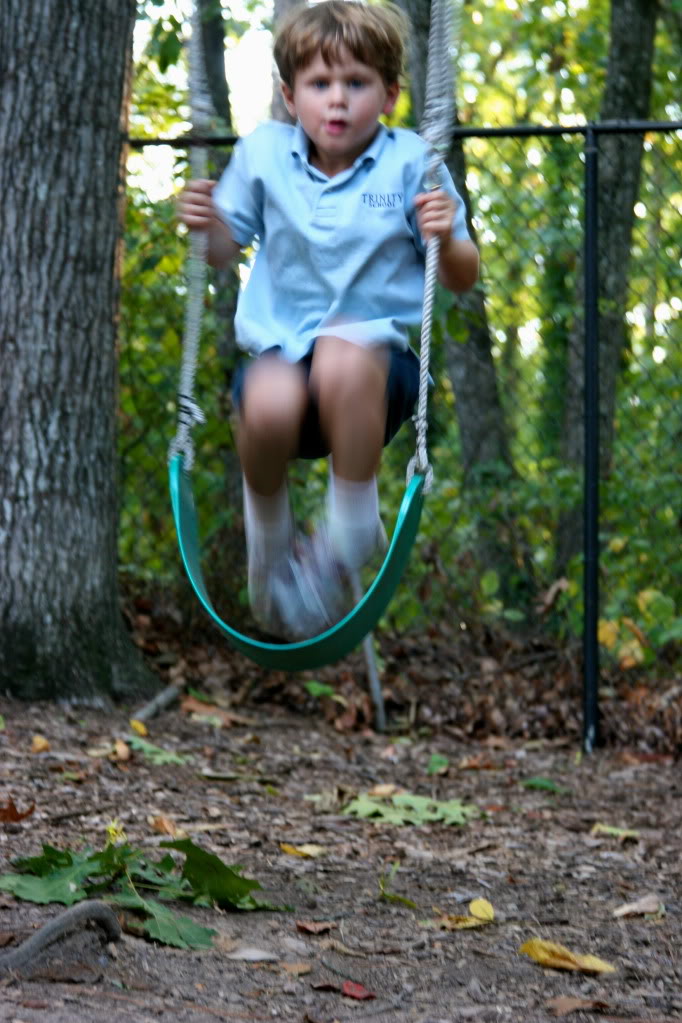 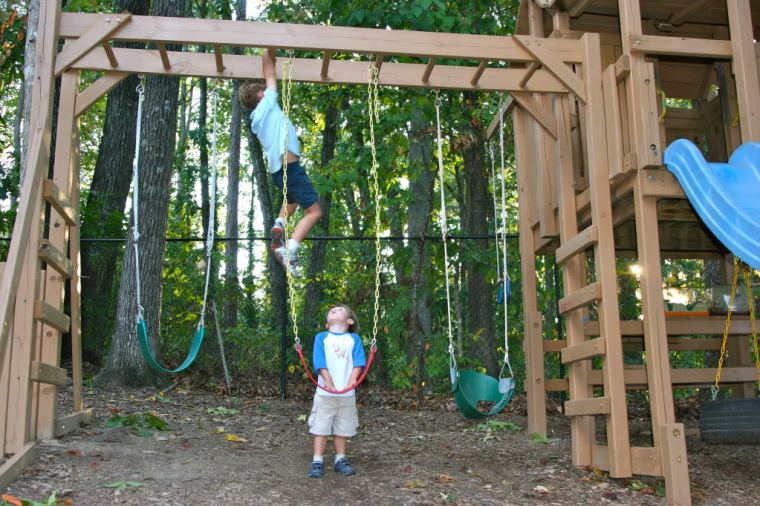 It means bundling up and pretending to be freezing cold (all a ploy to win some hot chocolate; I wasn’t born yesterday, you know).

It means happy pups, content to linger outside and soak it all up without sizzling.

Yes, you can still enjoy early fall even if you are deaf in your sniffer…

Welcome to the start of our favorite time of the year! 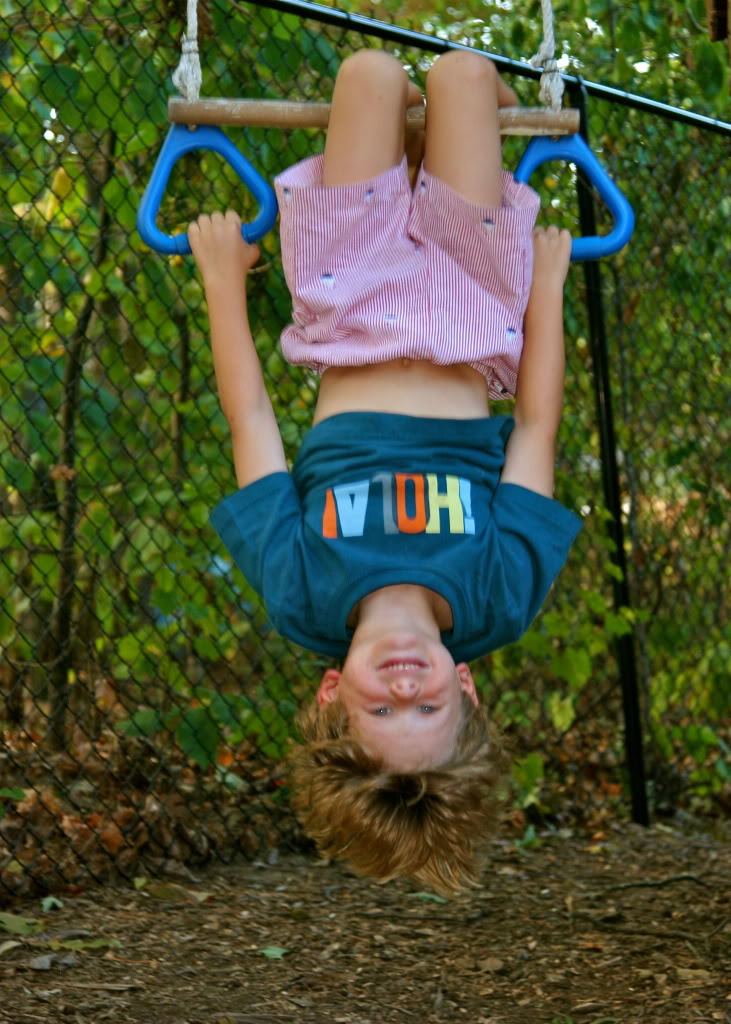 What took you so long?