It’s hard to beat the calming effect of a weekend at the beach, especially in the Fall.  The humidity has finally dropped off, the temperatures are tolerable and the water has cooled off enough to discourage little boys from wanting to spend the entire day being knocked down by waves.  Some of our best days are spent wandering the island in October.  The sun is at a perfect level for great beach photos…

Ocean breezes blow through the sea oats and everything smells salty, smoky, earthy–like a good October afternoon should. 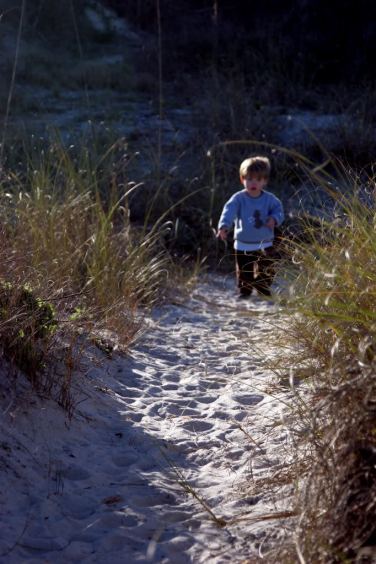 Yep, the beach in October is hard to beat…unless you go during a tropical storm, which is what we did last weekend.  Russ had gone up to Blacksburg for a football game so the boys and I decided to roadtrip it out of the big city for a little break on the island.  We stopped along the way and kidnapped my mom to tag along with us.  We made it to the Florida line before the torrential rains started.  Ten minutes later, the rains had passed, the sun was out, and the wind was blowing like nobody’s business.  In another ten minutes, the downpour started again.  Textbook tropical storm.

Theo was literally being blown around by the wind.

For someone as addicted to The Weather Channel as I am to have missed this forecast was pretty embarrassing.  A quick check showed the remnants of one tropical storm passing over northern Florida while another one was brewing south near Miami.  Couple this with some type of funky pressure system over Tennessee, and you end up with near constant 40mph winds (with gusts even higher) and bands of rain interspersed with brief periods of sunshine.  It was odd weather to say the least (and that song “Windy” by The Association kept lodging in my head.  You know you hear it now, too.  And trust me, it’ll be stuck there in your melon for days). 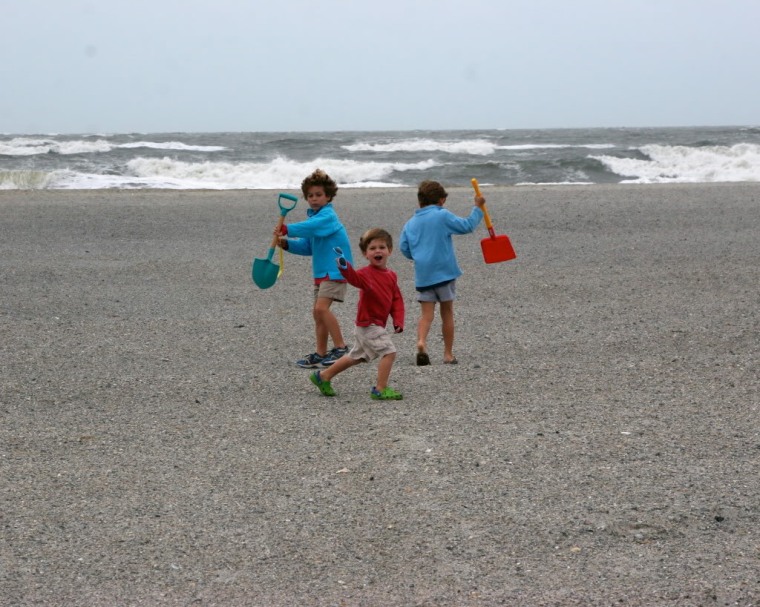 We trucked out to the beach on Saturday only to be defeated by the hurricane force winds.  The waves were so big that the boys didn’t even need a lecture about staying away from them.  Buckets blew all over the place, water mist was soaking us even though we were twenty feet from the water and the wind was loud enough to give us all headaches.  We chased down our stuff, packed up and went back home to bunker down. 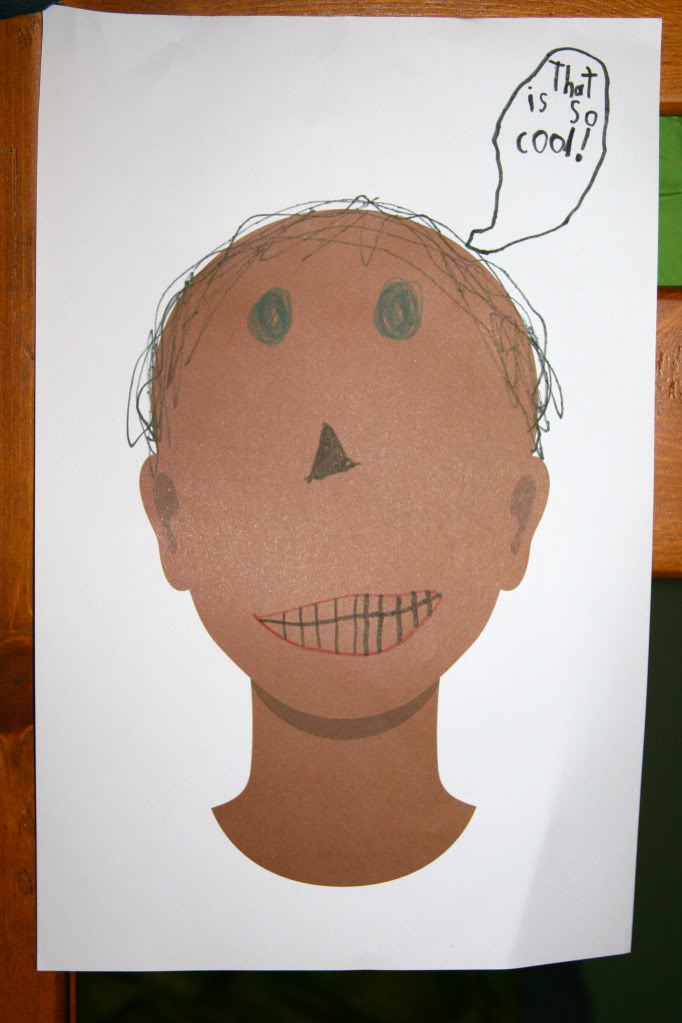 The boys built a hotel out of their room.  Here’s a photo of one of the guests.

We gave the beach another shot before we headed home.  We came over the hill on the boardwalk to the most unique beach I’ve ever seen in Florida.  The winds had churned up more foam than I’ve ever seen; in places, it came up the Theo’s waist.  The dredging project from last summer was all but ruined; giant cliffs of sand were everywhere along the shore.

We brought the old brown dog down for a little exercise; he loves the water (he is a lab, you know) and to him, fetching a thrown tennis ball is the best thing since a new chewy bone.  He digs in like a horse and sand flies out behind him as he runs…er, trots after the ball, making sure his return trip brings him splashing back through the edge of the water.  Buckley and the ocean are pals–until his tennis ball gets wet.  Prince Buck does not care for a mouthful of salty, wet, sandy ball, and when this inevitably happens, he’ll head to the waves, drop his ball and watch it sail out to sea. 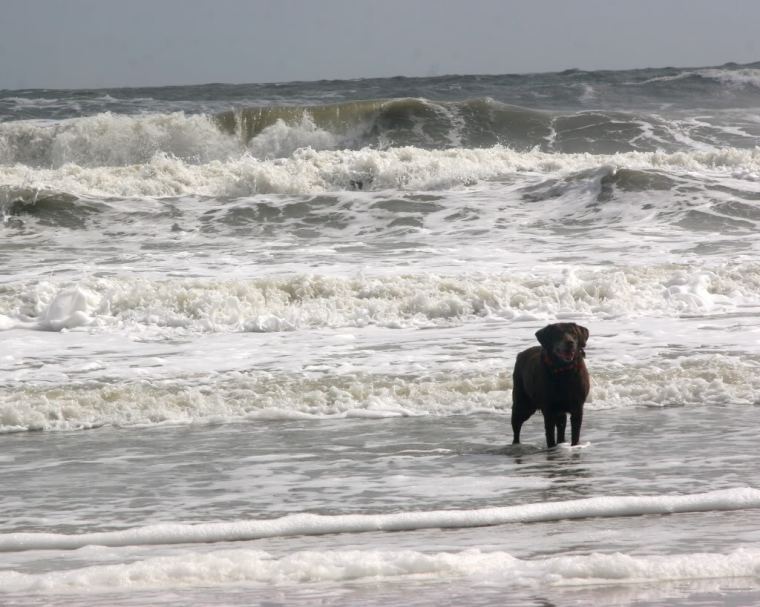 Look closely and you’ll see Buckley is smiling proudly after releasing yet another tennis ball into oceanic freedom.

The foam and choppy cliffs were too tempting; the boys got filthy–wet, sticky and dirty, which is just how boys should look after a good beach outing. 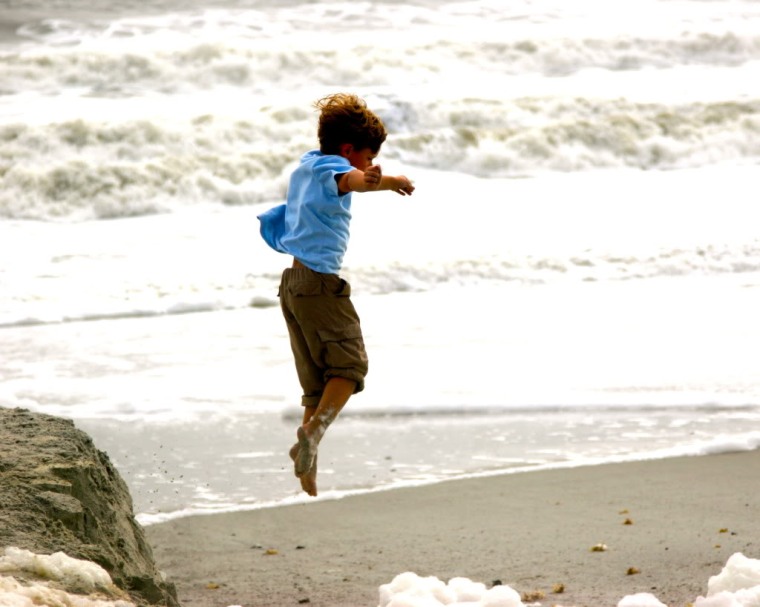 When we’d had enough of the weirdness of the beach, we headed out to our old faithful–Drummond Point.

Henry tags along for some good sniffing and sand crab chasing.

I love this shot of Theodorable looking up at his Little Baba as he carries his “bucket for interesting stuff” (rocks, sticks and dead butterflies, in this case). 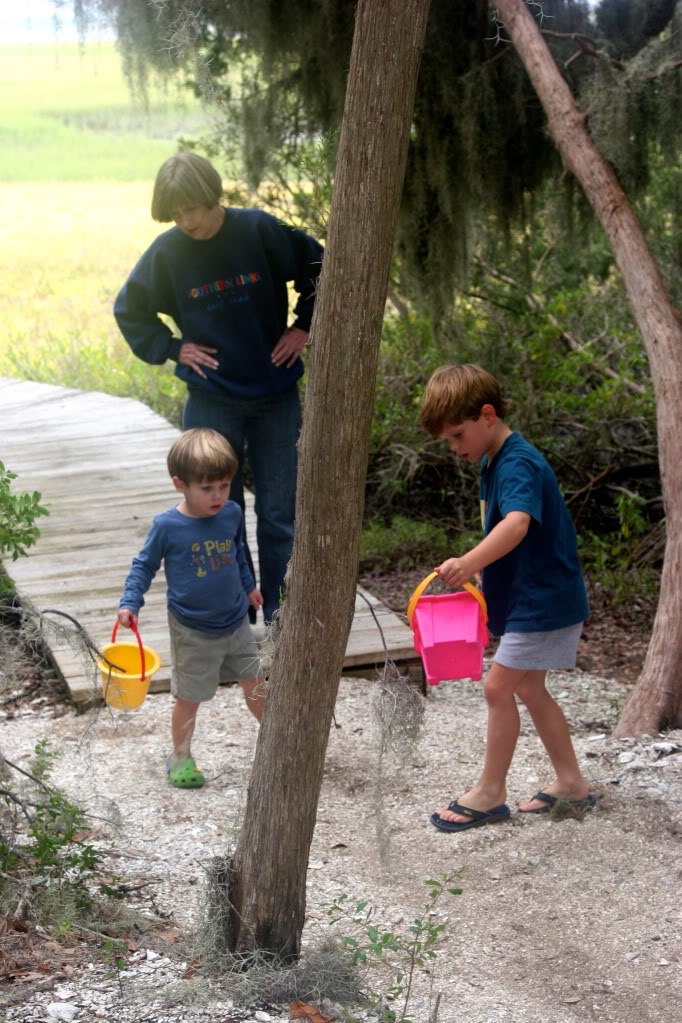 We will always contend that a sub-par weekend (weatherwise) at the beach still beats a good weekend sitting in Atlanta.

Oh, yeah.  There it is.  The blight of the neighborhood.  Large and in charge and likely visible from airplanes.

And now relegated to the basement again by Russ.  It must’ve scared him too much.

The second half of my favorite month has arrived; with all the holidays and great weather, it’s a non-stop good time from now through Tucker’s birthday on January 4th.  Hope you’re enjoying your October as much as we are!