[A photo-heavy, pseudo-travel-guide in several parts, written mostly for family and fellow Anglophiles…in case you were wondering.]

This post is a bit delayed. Forgive me; jet lag ain’t fun.

We took the boys across the pond for Spring Break this year; now that we’ve definitely survived, I have to say it was the best adventure yet.

Our flight left Atlanta at 10:30pm on a Friday night, so you realize we were setting ourselves up to deal with painfully exhausted boys from the very moment we left the house. I have several friends who’ve all gone to London with their own kiddos, and all of them gave the same advice:  once you land, hit the ground running. So that was our original plan–though in truth, we were going to play it by ear.

Uncle David met us at the airport and helped keep boys on the correct side of the road as we navigated the way from Heathrow to our hotel.

Ha. Thank you Park Lane Hotel for not having our room ready. We had no choice but to hit the ground running. We dumped our luggage and headed out to find some lunch. The concierge sent us around the corner from the hotel to Shepherd Market where we were reminded of Europe’s number 1 rule for eating out:  if the restaurant isn’t crowded, the food isn’t good. 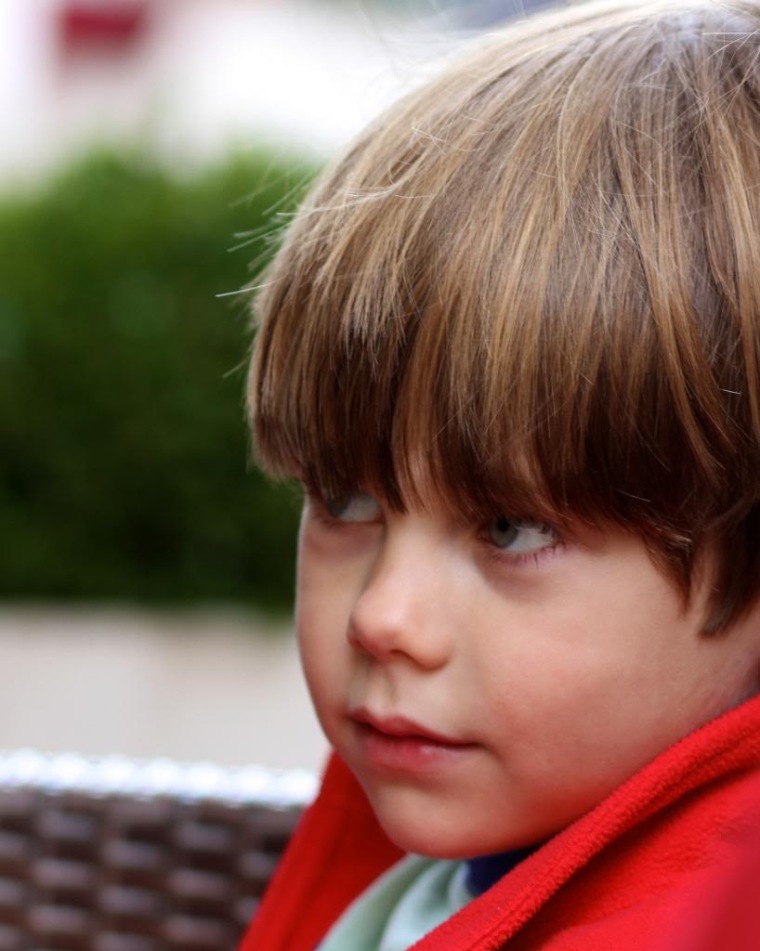 We walked in circles for about twenty minutes before deciding on a small Italianesque cafe with outdoor seating. This reminded us of Europe’s number 2 rule for dining out:  pasta will always work.

Russ ordered wine. I look at him with my glassed over, sleep deprived eyes and reminded him that it was technically 7 in the morning. “Back in Atlanta,” he replied. Ok, then. When in Rome and all that. Pass me a glass.

Where do you go on your first sightseeing adventure in London with small children who’ve slept maybe 4 hours? Somewhere lively, exciting, and kid-friendly, right? Somewhere where they could be loud and run around and–oh, yes–get some sunshine.

You were thinking the underground catacombs and bunkers of the WWII command center for Winston Churchill, weren’t you?

Off we went to the Churchill War Rooms.

Look at the combination of clothing on this boy. If that doesn’t scream “jet lag,” I don’t know what does…

The War Rooms were actually amazing…for everyone. And some patterns were beginning to be established:  Jack wanted to soak it all in. If there was an audio tour, he would listen. If there were placards, he would read them. Jack was sure to get the most bang for the buck at every single place we visited.

Seeing the Cabinet War Rooms was incredible. We are so very fortunate that none of our boys has endured any type of war like the World Wars; the whole concept of bombs falling on the very city where we were staying blew their minds. 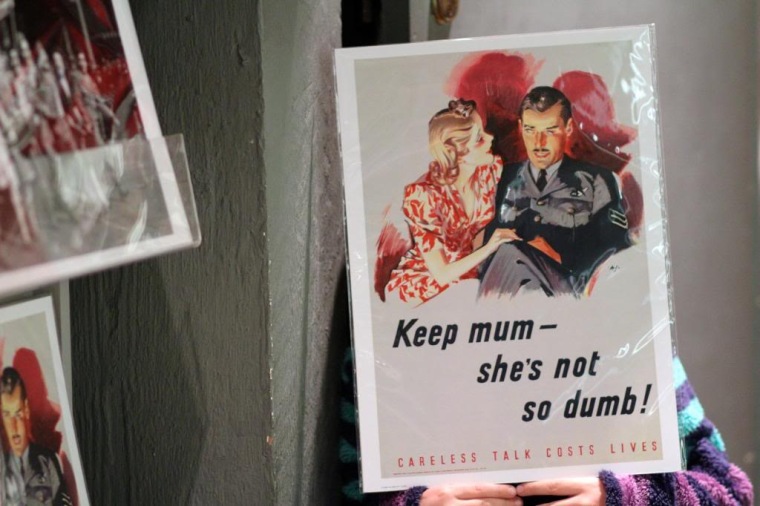 We left the War Rooms and stumbled around outside for a few minutes before realizing there was no way on Earth we could walk all the way back to our hotel. Time for public transportation.

Flashback:  once upon a time, Theo was absolutely obsessed with buses.

This infatuation was rekindled the very second he saw his first double-decker bus. Theo would shout it out to everyone…anyone…”DOUBLE DECKER BUS!!” He used his iTouch to take hundreds of pictures of double decker buses. If he’d had it his way, we’d have just ridden around London on a bus for a week. We decided to go ahead and nip this one in the bud, so we hopped a bus and rode it back to our hotel.

Theo didn’t want to get off.

We got back to our hotel–which had a giant revolving door at the front that beckoned to Tucker every time we came near it. He couldn’t stand it. He’d get in there and run until we started screaming or get in it and go around and around and around until the hotel doorman came up or get it in and stop it mid-way around until other hotel guests started beating on it. This happened every single time we left or returned to the hotel. It was maddening.

Tucker’s excuse? “I just can’t stand it. It’s too awesome.”

Anyway, when we finally got off the double decker bus and through the revolving door (between buses and doors, 2/3 of our boys were convinced London was the best place on Earth) and back to the front desk of the hotel around 5pm, we were beyond exhausted. We were punch-drunk and silly and couldn’t see straight, and our room still wasn’t ready. Russ discussed options with the clerk while the boys and I all lay on the floor. Of the lobby. While a Sikh wedding processed by us. Low point for the Americans, for sure.

We finally got up to our room and still needed a cot for Theo. I called down for it and then promptly passed out cold on top of the bed. Russ dealt with our own revolving door of visitors: housekeeping showing up with a crib (because, you know, that’s what the British call a “cot.” Rookie mistake; chalk it up to lack of sleep), returning with the American cot, returning again to put sheets on the cot and then coming yet again for some unknown reason. People were in and out of our room for nearly an hour, and I did not move an inch. It was the best power-nap I’ve ever taken.

No one else slept, though, due to all the in-and-out going on. We walked down the road to dinner (we sold out and went to the Hard Rock Cafe (don’t shudder) because A) it was close, and B) we knew the boys would eat). Jack fell asleep in his chair at the table and then fell right out of it onto the floor.

Sunday arrived and we all felt pretty good which was a good thing since someone had over scheduled our day.

Rookie mistake #2:  somehow I calculated the time change backwards when booking all of our tickets. Total idiot. So Sunday morning we had tickets for the London Eye at 11am–which is a completely reasonable time of day in the real world, but when you are barely 24 hours into the jet-lagged world, it still feels very much like the 6am you are used to.

But the London Eye was totally worth it.

Purchasing tickets ahead of time was a must-do. We zipped right up to the Eye-equivalent of the Disney FastPass while the rest of the line snaked around underneath us forever.

It goes without saying that the views were incredible. 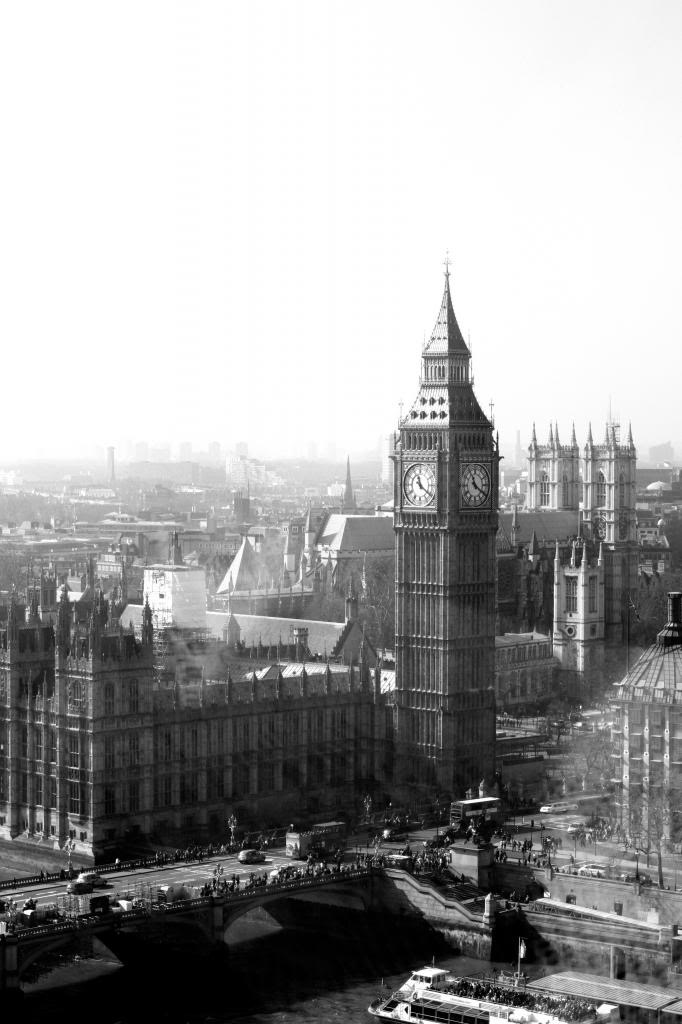 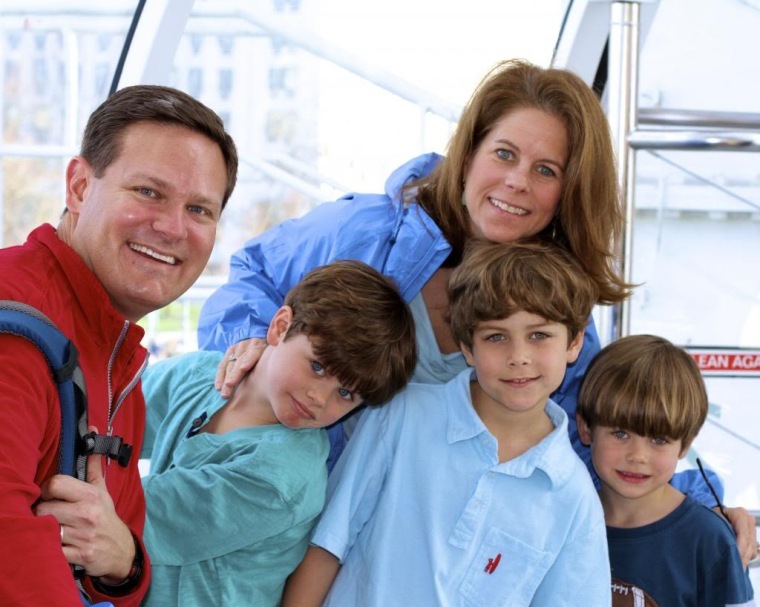 Did I say that the boys used their iTouches as cameras the entire time? I loved watching them take pictures–even if most of them were of things like pigeons and buskers and double-decker buses. Every now and then, I’d look over and catch them capturing something terrific. 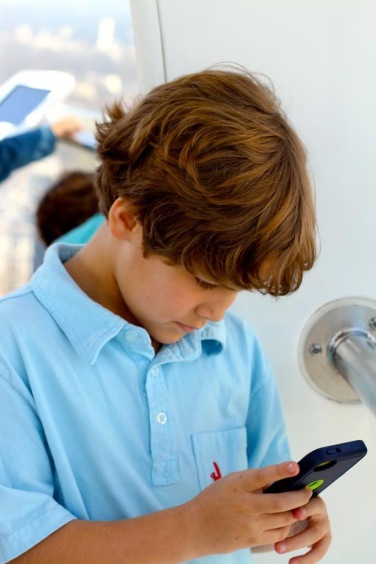 (I’m sure the good folk of London were convinced our boys were complete video game addicts, but that would be an utterly incorrect assumption. At least in London…check with us back home and you are likely to find them all knee-deep in Mindcraft or Terraria (what on earth is that?), but in London…nope. They were all budding Ansel Adamses.)

After the Eye, we were met by my sweet Uncle David (or “Uncle Beardy,” as the boys call him). He’s lived in London for well over 20 years and raised 2 boys there, so he was a solid resource. We laughed later because our Sunday afternoon had a definite nautical theme, but it was terrific.

We left the Eye and walked along the Thames for awhile. After an ordinary lunch (Uncle Beardy’s words; remember the first rule of dining in Europe? Yeah, we forgot about it, too…), we stopped at the Golden Hinde, a replica of Sir Francis Drake’s 16th century sailing vessel. 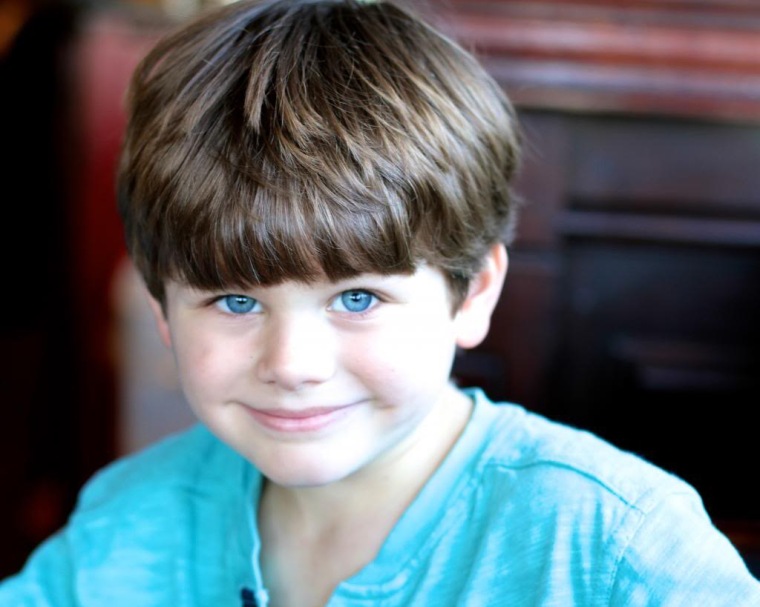 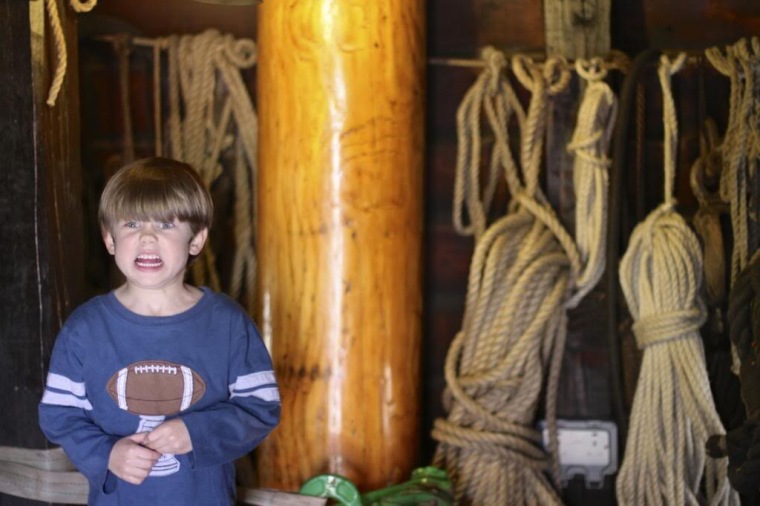 on board The Golden Hinde

There’s a reason all those sailors were crazy; I cannot imagine sailing across a sea in this cramped and tiny ship. No way. I could barely stand upright in the belly of the ship, and I’m only 5’3″. In a day long before the invention of Dramamine, I can’t even fathom how sick its crew was.

Of course Uncle Beardy had brought the boys to the right place. They thought the boat was a miniature model. Oh, no, cowboys. This puppy was built to scale. It’s one heck of an awesome floating museum. The boys ran, climbed, explored and accidentally sat in on a scheduled youth presentation. 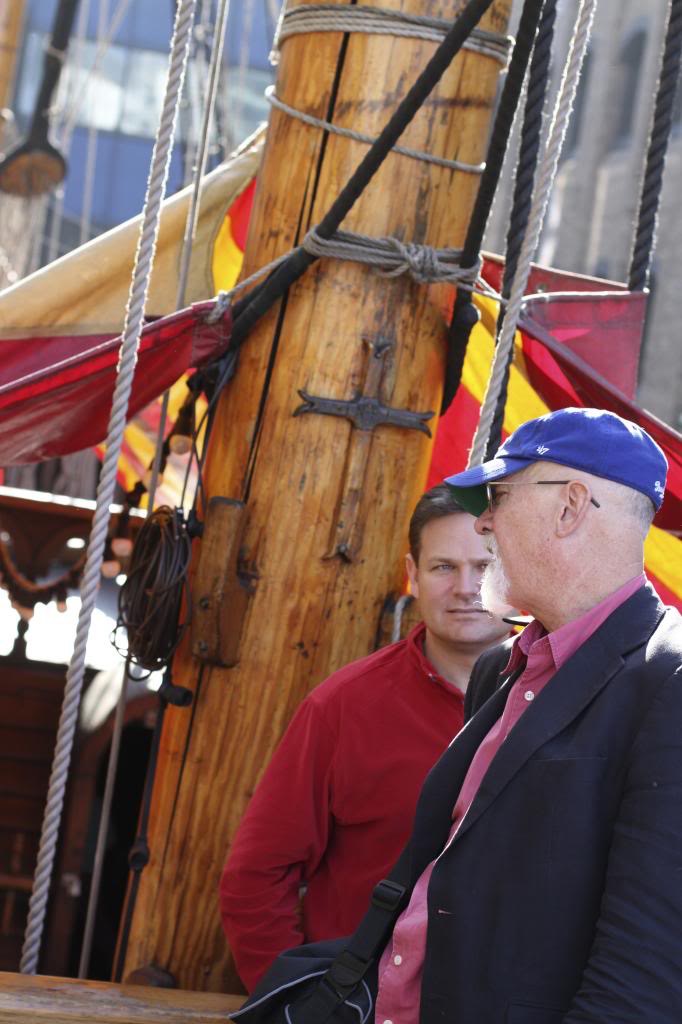 We left one boat and headed to the next (told you it was a nautical themed day).

Next stop: the HMS Belfast.

This was amazing. I just wish we had gotten to it earlier in the day. I think Jack and I could have spent hours here, but the rest of the family was withering a bit.

Jack and his audio tour.

The Belfast has 9 huge levels, each packed with information on the day-to-day life of a navy sailor as well as other exhibitions detailing WWII and D-Day. Intense. You want to talk about some brave people? These folks had courage in spades. I loved how Jack was full of questions about it all, and how we were able to talk about Papa B. (my grandfather) and his breathtakingly heroic actions in Normandy. (The lessons didn’t stop at the Belfast; Jack was able to see Papa B’s Silver Star and citation back at Uncle Beardy’s house. There just are no words for this. Incredible.) 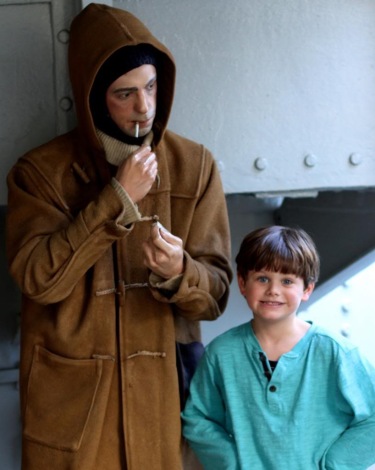 After all that heavy history, Tucker was begging to see something a little less intense. You know, something like a prison or torture chamber (his words). So while Uncle David refueled at Starbucks, the rest of us visited The Clink, a prison museum dating back to the 1100’s. 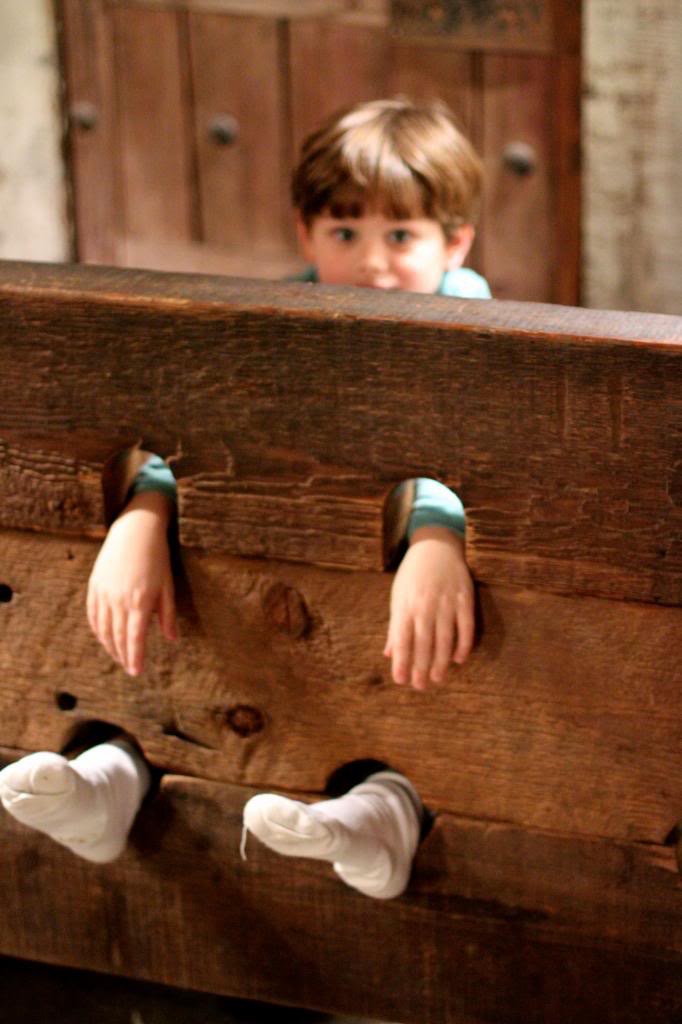 For a kid who loves Halloween, this place knocked his socks off (or, at least his shoes…).

We were all truly exhausted by this point, so we began to make our way to the train station to head out to Uncle Beardy’s house for dinner. 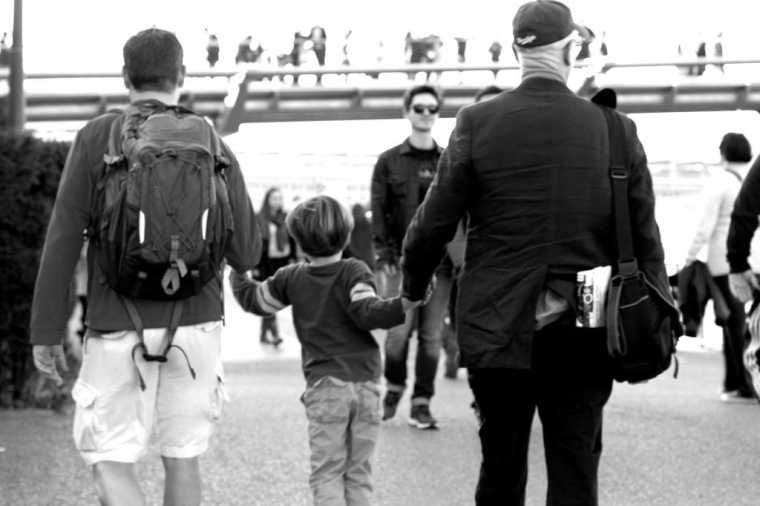 David lives right on a huge, gorgeous park. We had tea and then supper with him, our Aunt Debbie (whose birthday it was), and our super-fab cousin Will who was a life-saver and took the boys out in the backyard to play ping-pong and upstairs to see his brother Nick’s drum set (both of which quickly catapulted Will to hero level in Tuck’s book).

Sadly, this is the only shot I have of Debbie…and it’s only of her back. The photographer was worn out by this point. But check out that amazing park!

We cabbed it back to the hotel, endured the revolving door drama, cleaned up and crashed out. The boys we tucked in that night were some of the happiest we’ve seen. And our adventure had just begun; Part II includes a triple-decker bus (!!), a matinee on Drury Lane, a fancy French restaurant (twice), and more museums than you can shake a stick at…hopefully to be posted soon.