On Wednesday morning of our Spring Break adventure, we packed it up and headed south to Mayakoba. We checked in to the Fairmont and headed straight to the pool. The main pool has a water slide, so the boys were thrilled. After lunch, we headed down to the ocean.

Mayakoba is situated in the jungle and consists of 3 resorts, all very spaced out. In fact, to even get around the Fairmont, you had to take shuttle carts (or bicycles or walk a very long way).

I’d read that the beaches in Mayakoba were not as spectacular as the ones in Cancun, and the reviews were correct. The ocean was a lot rougher, and the beach was a lot smaller.

don’t get me wrong; it’s still a beach, so that by default makes it pretty awesome…

Guests at the Fairmont have the option to take a boat tour around the property. We grabbed the last boat of the day and settled back for a relaxing jungle cruise. The area is gorgeous and lush and chock full of critters.

turtle on a crocodile

We headed back to our room to shower and get situated for dinner. We had no advance reservations in Mayakoba, but because we’d been able to switch reservations and get new reservations so easily in Cancun, I was not worried.

That was a mistake.

The concierge was zero help, as was Open Table. So the first night, we ate dinner at Las Brisas at the Fairmont. While the ambiance was excellent, the food was nothing to really write home about.

We got back to our room and I managed to lock in a reservation at the highly recommended Italian restaurant at the Rosewood for the following evening.

We had our biggest adventure yet booked for the next day. We were picked up at our hotel at 8am and joined a group consisting of a couple from North Dakota, a couple from Mexico City, and a couple from Santiago, Chile. Our driver took us an hour south to a jungle near the ancient Mayan ruins of Tulum.

Well, actually, the first real part of the adventure was the 4×4 ride into the jungle. Our tour guide called the vehicle a Unimog. It was bouncy, fast, and without a doubt not very safe.

Into a deep hole that was filled with freezing cold water.

I cannot believe I actually did this.

You know it’s going to be cold when the helper-dude is wearing a wetsuit.

After the rappelling, we climbed an extremely rickety, homemade ladder/gangway type thing and zip lined through the jungle. 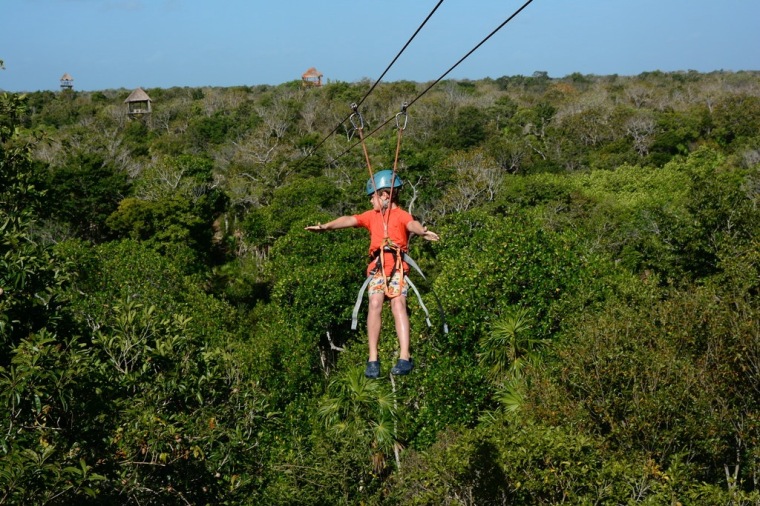 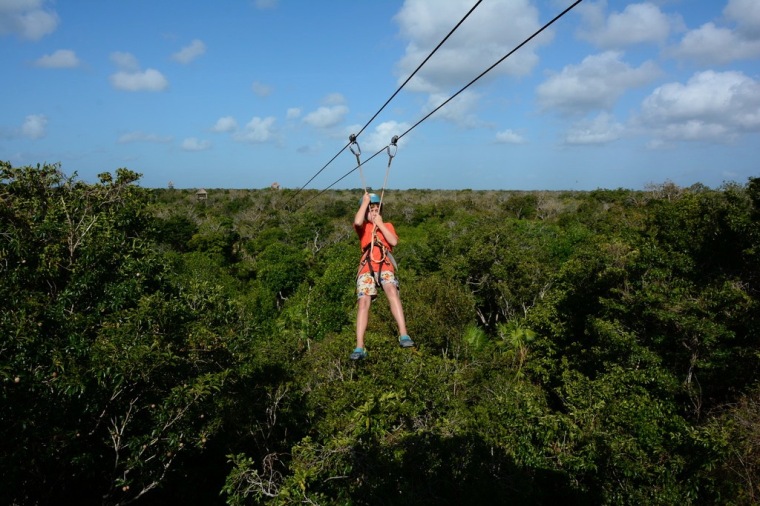 The final zip line ended in another cave filled with freezing water.

Then we donned snorkel gear and snorkeled in an underground river. Cold. But amazing.

After that, we ate an authentic Mayan lunch prepared in the middle of the jungle.

Yes, you read that correctly. And the biggest miracle isn’t that we all survived unscathed, it’s that every single person in our family actually ate the food without complaining. Even Jack.

After lunch, we hiked through the jungle to another cenote where some type of Mayan ceremony was performed that involved a whole lot of incense.

Then we reloaded the crazy Unimog and reboarded the minibus which took us on down to Tulum.

The ruins at Tulum were pretty incredible. If you know anything about the Mayans then you know that they were some seriously mean folks. The boys were fascinated by the guide’s tales of human sacrifice and whatnot. 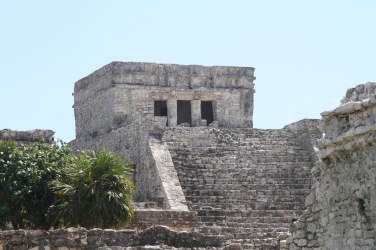 Theo was convinced these were bloody handprints on the wall of the temple where the Mayans sacrificed humans.

While our tour guide spoke, this critter scampered by only about 10 feet away from me.
It’s a coatimundi. Ok, then. 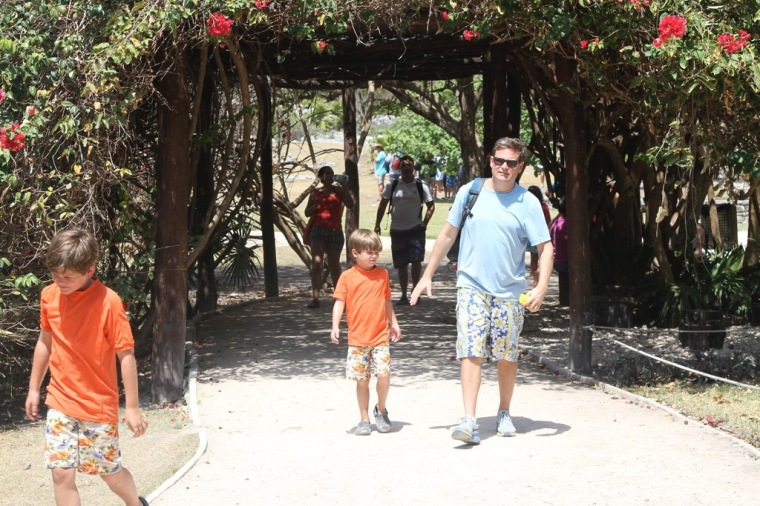 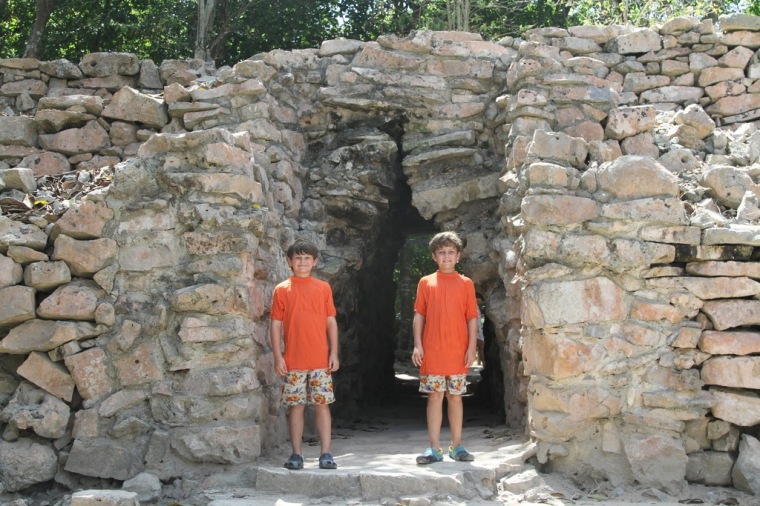 After the official tour, we were able to explore the ruins a bit ourselves. The walled city goes right up to the beach. The water here was as incredible as it was in Cancun. 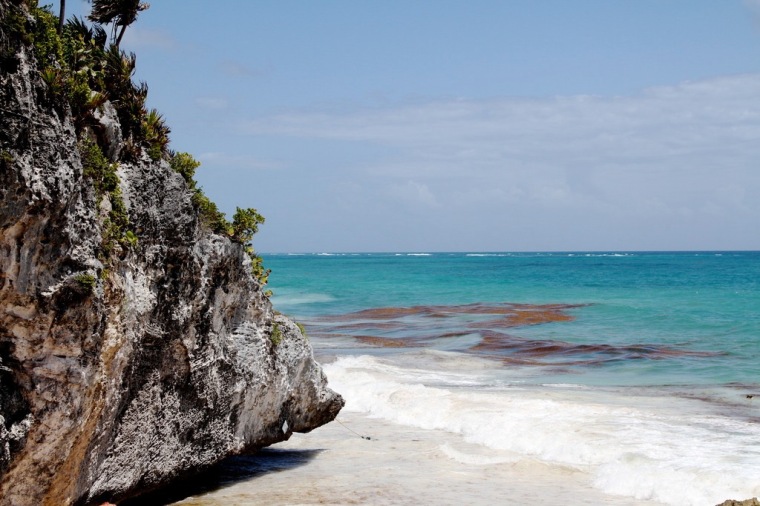 Back at the tour group meet-up spot, there was a Mexican market and Voladores–these Mayans below who climbed a tall pole and then spun their way down. The boys were mesmerized.

The Mexican market was the best place for buying souvenirs, but after all the craziness of the day, I was not fired up about bartering in Spanish. Plus, we only had a few minutes left before the ride back to Mayakoba so we opted to let the boys change into dry clothes instead.

The only poorly translated sign we saw the whole time in Mexico…if you care about that.

We got back to the room, showered up, and rested until time for dinner. Everyone was very excited about the Italian restaurant.

But we got there and the restaurant didn’t have our reservation. And I wasn’t able to convince them that because their restaurant was empty and because it was only 6:00 that they most likely could stuff us in the corner where we’d eat very quickly and then be on our way. Instead, they sent us across the resort to what they called “the Asian restaurant” and said we could eat at the Italian place the following night.

Agave Azul was good–and the boys love Asian food–but it was definitely a 180 from what we were expecting that night. We ate quickly and headed back to the Fairmont for the night.

The next day was our last day in Mexico. We spent the entire day camped out by the pool.

And I’m happy to report that our meal that night at the Italian restaurant, Casa del Lago, was just as great as we’d anticipated it would be. 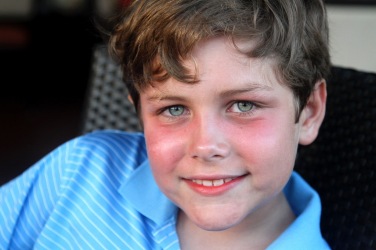 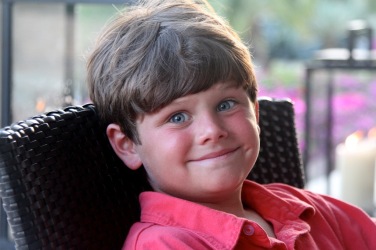 Our flight home was uneventful until we got to baggage claim.

We saw Dikembe Mutombo in the international terminal last year when we flew home from London. Russ sent Theo up to him to give him his trademark finger-wagging/”no, no, no!” to which Dikembe responded by giving Theo a high-five. We didn’t take a picture though and then kicked ourselves afterwards for not being brave enough to ask for one.

We did not make that mistake again when we saw him this year.

All in all, our trip to Mexico was fantastic, and we are very glad we split our time between two different resorts. The jungle adventure was the highlight; it was absolutely packed with activity, and the boys had a blast. The Thai restaurant in Cancun was our favorite meal, hands down. We spent much more time on the beach in Cancun than we did in Mayakoba, but our rooms in Mayakoba were much more unique (the bathroom itself featured an entire wall–floor to ceiling–of glass), and Mayakoba was much less crowded. We somehow managed to get the best of both worlds–beach and jungle, touristy and secluded–by splitting up our trip, even though switching hotels midway through a trip is something we have never, ever wanted to do before.

In a nutshell, we’d recommend this trip to just about anyone. The only thing we’d do differently would be to bring along a full calendar of dinner reservations and a full stash of medicines for stomach ailments. Otherwise, we wouldn’t change a thing.

So who goes to Cancun anymore?

And we’d do it again in a heartbeat.