When one thinks of Rome, one surely thinks of this big guy and all he stands for. During the 5th grade Olympics at his school, Jack had immersed himself in all things ancient Rome, so he was looking forward to seeing the Colosseum in real life. I’d found out from a friend about an amazing tour of the Third ring and the Underground at the Colosseum, so it was one of the first tours I actually booked.

But before the Colosseum there was…you guessed it…another Holy Door. 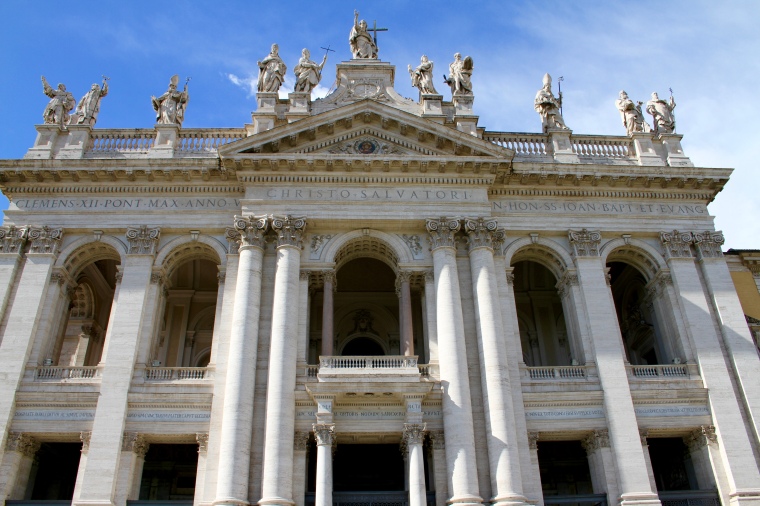 the Basilica of St. John in Lateran

The flower garland draped over the door was the only decoration we saw on any of the Holy Doors.

The Basilica of St. John in Lateran has a ton of history to it:  it’s the actual cathedral church of Rome and its construction was ordered by Emperor Constantine, the man who helped turn Rome from paganism and towards Christianity.

the Holy Door from inside the Basilica

Across the street from the Basilica is the Scala Sancta, a set of 28 marble stairs brought to Rome by Emperor Constantine’s mother, Helena, sometime around the year 326. These stairs are the ones Jesus walked up to receive his judgment from Pontius Pilate; the faithful climb them on their knees, a particularly holy exercise, especially during Lent. 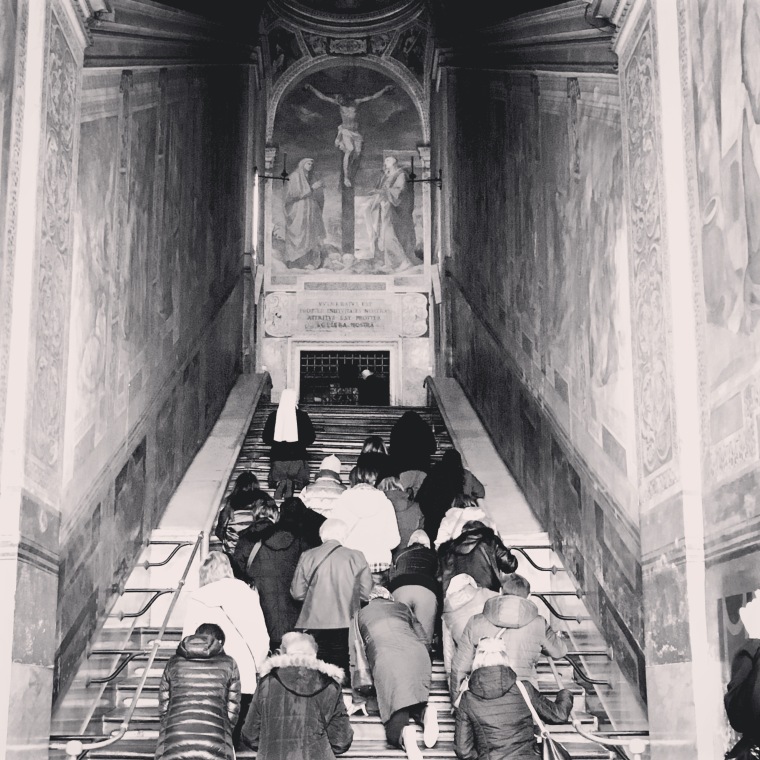 It was difficult; it was powerful, and it hurt; however, we are certain it hurt much less than crucifixion. We were surrounded by nuns and pilgrims, and it was completely silent except for the low murmuring of prayers.

We left the Scala Sancta a little stunned. We could see the Colosseum about a mile ahead of us, and we had a little over an hour until our tour of its Third Ring and the Underground, so we decided to walk there and stop for a quick lunch on the way.

But nothing in Rome is quick.

We found an adorable little sidewalk cafe, Trattoria Luzzi, around 11:45 and popped right in, sat down and ordered. The host came and sat next to us, chatting with the boys and making them laugh. I pulled out our Colosseum tickets and explained that we needed to be there by 12:30. Our charming host told us not to worry.

So we didn’t. And he didn’t either.

Our food–which was quite good, by the way–didn’t arrive until 12:15, and we woofed it down in a typically rude American fashion then set off on a mad dash down the hill to the Colosseum.

We arrived 5 minutes late and were told our tour had already left without us. To add insult to the injury, we were also told we needed to purchase entirely new tickets to gain access to the Colosseum at all. I’m still confused by this as our Third Ring tickets were not cheap and definitely included getting in the door. We managed to convince the ticket lady to let us in on a much shorter tour of the areas open to the general public led by a guide, which was to start at 12:45.

The guide didn’t even show up until 1, which only led me to believe there was no way being 5 minutes late was the death knell to the original tour. Grr. Frustration. Did I mention it was pouring rain at this point, too? 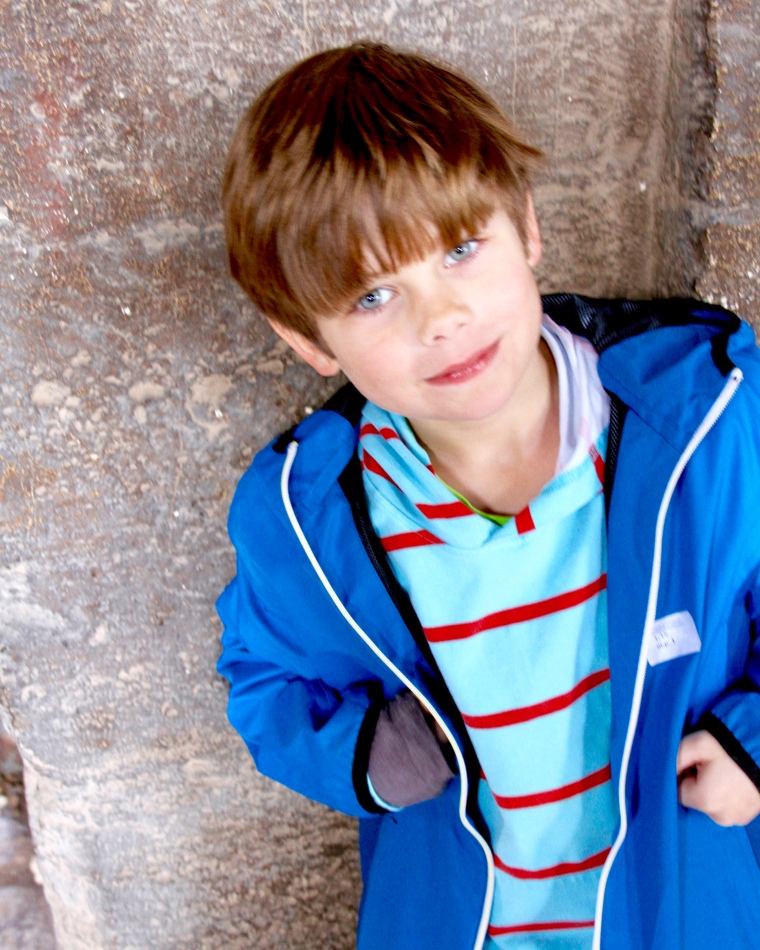 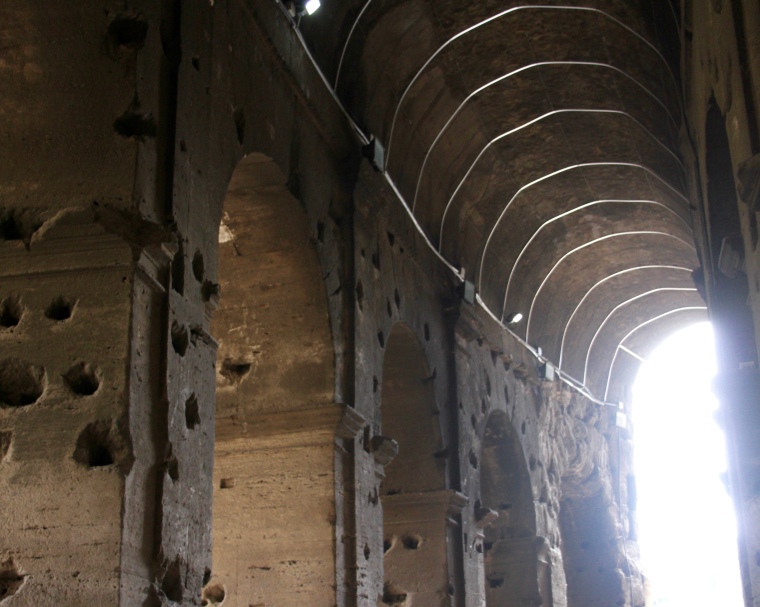 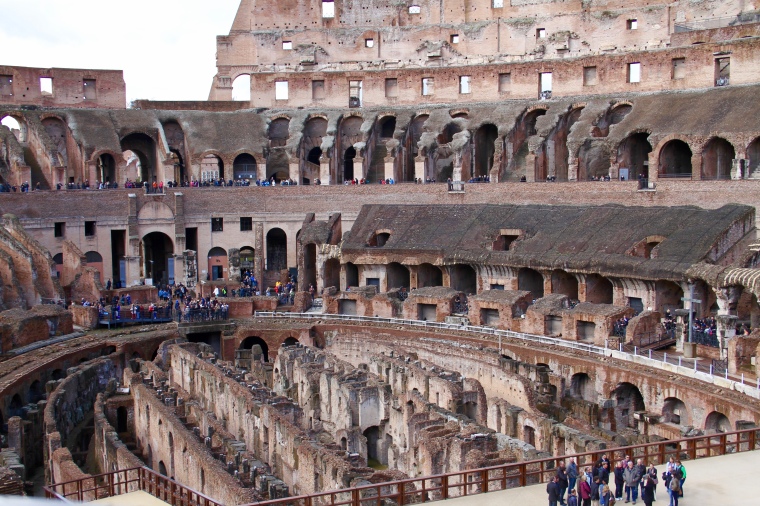 Roman weather in March is insane…thunderstorms one second, bright blue skies the next…

The 45-minute tour was, to be honest, nothing much to write home about–most likely because we were all disappointed to be missing out on the Third Ring/Underground tour and growing a little weary of the schizophrenic weather.

Our next stop was Gladiator School. Thankfully, a friend had warned me that this is way, way out in the middle of nowhere. She certainly wasn’t kidding. It took awhile to even find a taxi who would drive us. Then he dumped us off at what looked like an exit ramp to an interstate and grunted at us to head that way.

Thankfully, Russ had Google Maps fired up on his phone, and we headed down the highway and then turned right onto a dirt road. The whole walk there was surreal; I was honestly worried that we had the wrong address and was also concerned with how on earth we were going to get back to town. We saw only one car (pictured below) on our 15 minute walk.

I was seriously wondering what I’d gotten us into at this point, but Gladiator School was an absolute slam dunk. 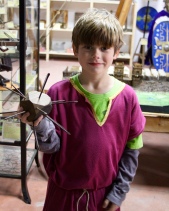 The owner, Paolo, meant business. This was a combo of American Ninja Warrior and Ultimate Fighting lessons. Each boy cried at least once while Russ and I sat on some wooden bleachers and took in the spectacle (stellar parenting, no?). But somehow they all graduated from Gladiator School and were given certificates (and a bonus lesson on the importance of a firm handshake). Paolo was a hero and even called us a taxi.

Between the Colosseum tour debacle and the 2.5 hour Gladiator School experience, we were worn out, so we took a break at the apartment before heading out to dinner.

Da Pancrazio was amazing. Built over the site where Julius Caesar was assassinated, the place just oozes history. (Don’t let its emptiness fool you; we were still dining on American time–around 7–instead of the typically Roman time for dinner, which is much, much later and unmanageable with small kiddos.) Afterwards, we walked over to the Campo di Fiori, an open air marketplace that is decidedly more happening in the daylight hours and when it’s not raining. 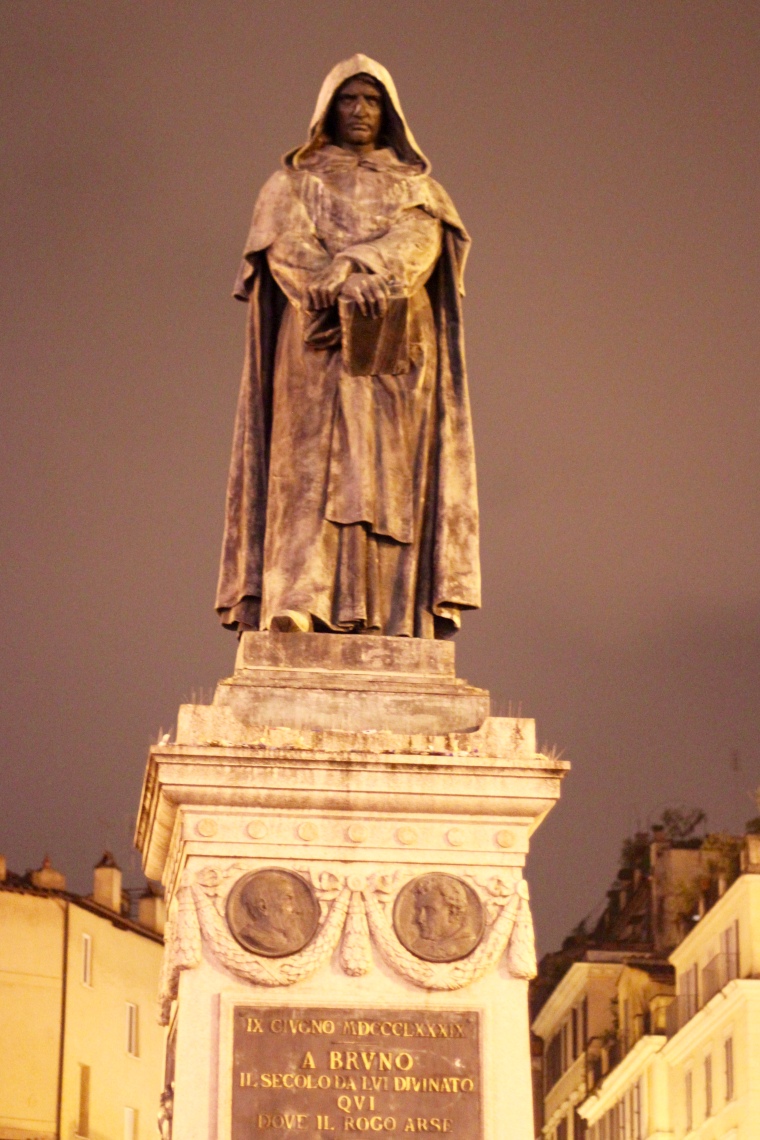 While Gladiator School was a highlight, we were surprised at how overrated we found the Colosseum–something that surely was driven by our frustration at missing our original tour and subsequently enduring a much more common, less detailed visit with a guide who spoke very broken English. We were still in love with Rome, but we were not happy that we’d spent a good chunk of our day wrapped up with the Colosseum. Maybe all of that was God’s way of fussing at us for following the most Holy experience of the Scala Sancta with a visit to a place that was once totally devoted to grisly battles and the unnecessary butchering of animals (our guide proudly told us that over “5,000 beasts” were slaughtered during the Colosseum’s inaugural celebration–a spectacle which lasted 100 days). Ugh.

We were now halfway through our Italian adventure, and the best parts were coming up.